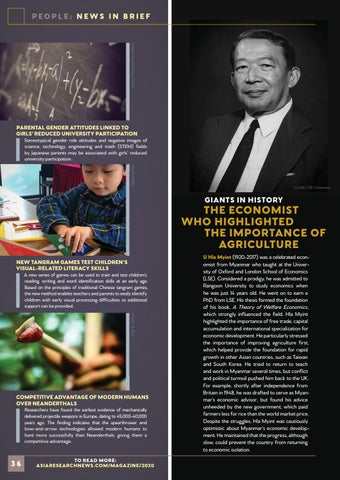 A new series of games can be used to train and test children’s reading, writing and word identification skills at an early age. Based on the principles of traditional Chinese tangram games, the new method enables teachers and parents to easily identify children with early visual processing difficulties so additional support can be provided. Credit: S. Ricci

COMPETITIVE ADVANTAGE OF MODERN HUMANS OVER NEANDERTHALS Researchers have found the earliest evidence of mechanically delivered projectile weapons in Europe, dating to 45,000-40,000 years ago. The finding indicates that the spearthrower and bow-and-arrow technologies allowed modern humans to hunt more successfully than Neanderthals, giving them a competitive advantage.

U Hla Myint (1920-2017) was a celebrated economist from Myanmar who taught at the University of Oxford and London School of Economics (LSE). Considered a prodigy, he was admitted to Rangoon University to study economics when he was just 14 years old. He went on to earn a PhD from LSE. His thesis formed the foundation of his book, A Theory of Welfare Economics, which strongly influenced the field. Hla Myint highlighted the importance of free trade, capital accumulation and international specialization for economic development. He particularly stressed the importance of improving agriculture first, which helped provide the foundation for rapid growth in other Asian countries, such as Taiwan and South Korea. He tried to return to teach and work in Myanmar several times, but conflict and political turmoil pushed him back to the UK. For example, shortly after independence from Britain in 1948, he was drafted to serve as Myanmar’s economic advisor, but found his advice unheeded by the new government, which paid farmers less for rice than the world market price. Despite the struggles, Hla Myint was cautiously optimistic about Myanmar’s economic development. He maintained that the progress, although slow, could prevent the country from returning to economic isolation.