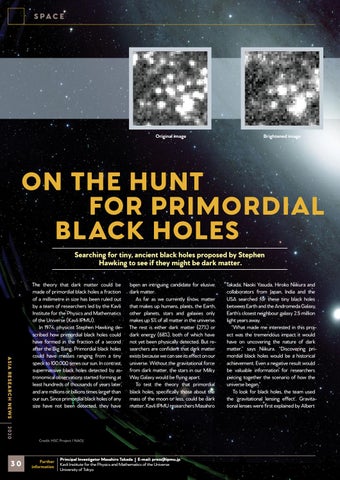 ON THE HUNT FOR PRIMORDIAL BLACK HOLES Searching for tiny, ancient black holes proposed by Stephen Hawking to see if they might be dark matter.

been an intriguing candidate for elusive dark matter. As far as we currently know, matter that makes up humans, plants, the Earth, other planets, stars and galaxies only makes up 5% of all matter in the universe. The rest is either dark matter (27%) or dark energy (68%), both of which have not yet been physically detected. But researchers are confident that dark matter exists because we can see its effect on our universe. Without the gravitational force from dark matter, the stars in our Milky Way Galaxy would be flying apart. To test the theory that primordial black holes, specifically those about the mass of the moon or less, could be dark matter, Kavli IPMU researchers Masahiro

Principal Investigator Masahiro Takada | E-mail: press@ipmu.jp Kavli Institute for the Physics and Mathematics of the Universe University of Tokyo

Takada, Naoki Yasuda, Hiroko Niikura and collaborators from Japan, India and the USA searched for these tiny black holes between Earth and the Andromeda Galaxy, Earth’s closest neighbour galaxy 2.5 million light years away. “What made me interested in this project was the tremendous impact it would have on uncovering the nature of dark matter,” says Niikura. “Discovering primordial black holes would be a historical achievement. Even a negative result would be valuable information for researchers piecing together the scenario of how the universe began.” To look for black holes, the team used the ‘gravitational lensing effect’. Gravitational lenses were first explained by Albert