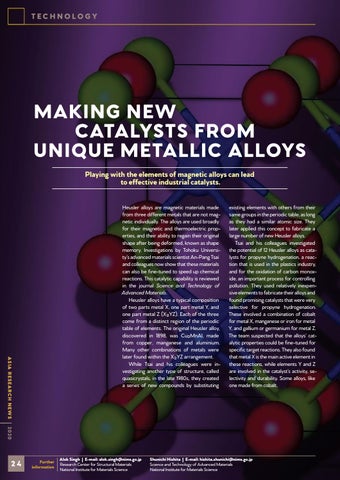 MAKING NEW CATALYSTS FROM UNIQUE METALLIC ALLOYS Playing with the elements of magnetic alloys can lead to effective industrial catalysts.

Heusler alloys are magnetic materials made from three different metals that are not magnetic individually. The alloys are used broadly for their magnetic and thermoelectric properties, and their ability to regain their original shape after being deformed, known as shape memory. Investigations by Tohoku University’s advanced materials scientist An-Pang Tsai and colleagues now show that these materials can also be fine-tuned to speed up chemical reactions. This catalytic capability is reviewed in the journal Science and Technology of Advanced Materials. Heusler alloys have a typical composition of two parts metal X, one part metal Y, and one part metal Z (X2YZ). Each of the three come from a distinct region of the periodic table of elements. The original Heusler alloy, discovered in 1898, was Cu2MnAl, made from copper, manganese and aluminium. Many other combinations of metals were later found within the X2YZ arrangement. While Tsai and his colleagues were investigating another type of structure, called quasicrystals, in the late 1980s, they created a series of new compounds by substituting

existing elements with others from their same groups in the periodic table, as long as they had a similar atomic size. They later applied this concept to fabricate a large number of new Heusler alloys. Tsai and his colleagues investigated the potential of 12 Heusler alloys as catalysts for propyne hydrogenation, a reaction that is used in the plastics industry, and for the oxidation of carbon monoxide, an important process for controlling pollution. They used relatively inexpensive elements to fabricate their alloys and found promising catalysts that were very selective for propyne hydrogenation. These involved a combination of cobalt for metal X, manganese or iron for metal Y, and gallium or germanium for metal Z. The team suspected that the alloys’ catalytic properties could be fine-tuned for specific target reactions. They also found that metal X is the main active element in these reactions, while elements Y and Z are involved in the catalyst’s activity, selectivity and durability. Some alloys, like one made from cobalt,