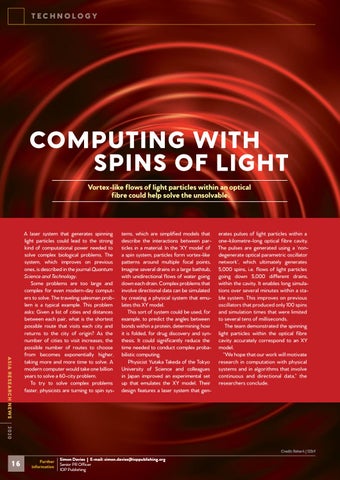 COMPUTING WITH SPINS OF LIGHT Vortex-like flows of light particles within an optical fibre could help solve the unsolvable.

A laser system that generates spinning light particles could lead to the strong kind of computational power needed to solve complex biological problems. The system, which improves on previous ones, is described in the journal Quantum Science and Technology. Some problems are too large and complex for even modern-day computers to solve. The traveling salesman problem is a typical example. This problem asks: Given a list of cities and distances between each pair, what is the shortest possible route that visits each city and returns to the city of origin? As the number of cities to visit increases, the possible number of routes to choose from becomes exponentially higher, taking more and more time to solve. A modern computer would take one billion years to solve a 60-city problem. To try to solve complex problems faster, physicists are turning to spin sys-

tems, which are simplified models that describe the interactions between particles in a material. In the ‘XY model’ of a spin system, particles form vortex-like patterns around multiple focal points. Imagine several drains in a large bathtub, with unidirectional flows of water going down each drain. Complex problems that involve directional data can be simulated by creating a physical system that emulates this XY model. This sort of system could be used, for example, to predict the angles between bonds within a protein, determining how it is folded, for drug discovery and synthesis. It could significantly reduce the time needed to conduct complex probabilistic computing. Physicist Yutaka Takeda of the Tokyo University of Science and colleagues in Japan improved an experimental set up that emulates the XY model. Their design features a laser system that gen-

erates pulses of light particles within a one-kilometre-long optical fibre cavity. The pulses are generated using a ‘nondegenerate optical parametric oscillator network’, which ultimately generates 5,000 spins, i.e. flows of light particles going down 5,000 different drains, within the cavity. It enables long simulations over several minutes within a stable system. This improves on previous oscillators that produced only 100 spins and simulation times that were limited to several tens of milliseconds. The team demonstrated the spinning light particles within the optical fibre cavity accurately correspond to an XY model. “We hope that our work will motivate research in computation with physical systems and in algorithms that involve continuous and directional data,” the researchers conclude.