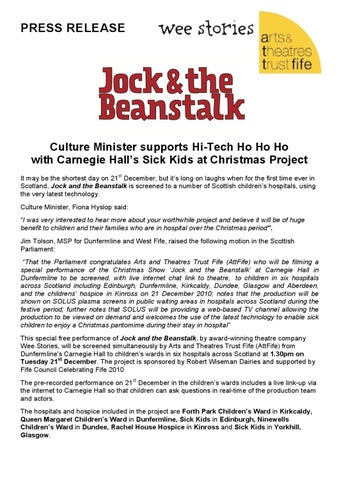 Culture Minister supports Hi-Tech Ho Ho Ho with Carnegie Hall’s Sick Kids at Christmas Project It may be the shortest day on 21st December, but it’s long on laughs when for the first time ever in Scotland, Jock and the Beanstalk is screened to a number of Scottish children’s hospitals, using the very latest technology. Culture Minister, Fiona Hyslop said: “I was very interested to hear more about your worthwhile project and believe it will be of huge benefit to children and their families who are in hospital over the Christmas period”. Jim Tolson, MSP for Dunfermline and West Fife, raised the following motion in the Scottish Parliament: “That the Parliament congratulates Arts and Theatres Trust Fife (AttFife) who will be filming a special performance of the Christmas Show ‘Jock and the Beanstalk’ at Carnegie Hall in Dunfermline to be screened, with live internet chat link to theatre, to children in six hospitals across Scotland including Edinburgh, Dunfermline, Kirkcaldy, Dundee, Glasgow and Aberdeen, and the childrens’ hospice in Kinross on 21 December 2010; notes that the production will be shown on SOLUS plasma screens in public waiting areas in hospitals across Scotland during the festive period; further notes that SOLUS will be providing a web-based TV channel allowing the production to be viewed on demand and welcomes the use of the latest technology to enable sick children to enjoy a Christmas pantomime during their stay in hospital” This special free performance of Jock and the Beanstalk, by award-winning theatre company Wee Stories, will be screened simultaneously by Arts and Theatres Trust Fife (AttFife) from Dunfermline&#39;s Carnegie Hall to children&#39;s wards in six hospitals across Scotland at 1.30pm on Tuesday 21st December. The project is sponsored by Robert Wiseman Dairies and supported by Fife Council Celebrating Fife 2010 The pre-recorded performance on 21st December in the children’s wards includes a live link-up via the internet to Carnegie Hall so that children can ask questions in real-time of the production team and actors. The hospitals and hospice included in the project are Forth Park Children’s Ward in Kirkcaldy, Queen Margaret Children’s Ward in Dunfermline, Sick Kids in Edinburgh, Ninewells Children’s Ward in Dundee, Rachel House Hospice in Kinross and Sick Kids in Yorkhill, Glasgow.

Over the last few months, representatives from AttFife have been working closely with each hospital involved in the project to understand the needs of both patients and staff. In so doing, they have developed a tailored approach to suit each individual hospital depending on the needs of patients and their technical resources. So, for instance, in one hospital, children may be settling down to watch Jock and the Beanstalk on the large screens in their wards or playrooms; in Dundee and Glasgow, the Medi-cinema facilities can be utilized, and in others, the conference facilities usually reserved for teaching purposes, but perfectly suitable for screening and also access to the internet, will be used. The idea to apply use of the facilities in this way had simply never been considered before.

Staff from AttFife and volunteers from each hospital will also be on hand to make the family party atmosphere spread from Fife to each of the hospitals in Scotland. Each child will be given a Jock and the Beanstalk Christmas fun pack, containing craft activities, colouring- in pens and stickers, and there will be face-painting. The children in hospital, their families and staff, will be able to enjoy a Christmas show even though they are in hospital.

In addition to the screening in hospitals on 21 December, Jock and the Beanstalk will be shown on SOLUS plasma screens in up to 250 public waiting areas in hospitals across Scotland, the first time cultural content will be made available on this network.

SOLUS will also be providing a Web-based TV channel where the performance may be viewed on demand. This will be particularly beneficial to some children who are not well enough on the day to see the group screening, or if children simply want to catch up again with other friends and family. The staff may also want to view again over the festive period.

Information about the ATT Fife's project to share their Christmas production of Jock and the Beanstock with children in hospitals around Scotland. 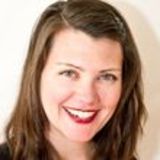