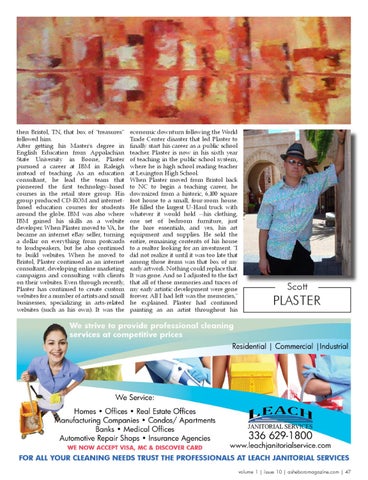 then Bristol, TN, that box of “treasures” followed him. After getting his Master&#39;s degree in English Education from Appalachian State University in Boone, Plaster pursued a career at IBM in Raleigh instead of teaching. As an education consultant, he lead the team that pioneered the first technology-based courses in the retail store group. His group produced CD-ROM and internetbased education courses for students around the globe. IBM was also where IBM gained his skills as a website developer. When Plaster moved to VA, he became an internet eBay seller, turning a dollar on everything from postcards to loudspeakers, but he also continued to build websites. When he moved to Bristol, Plaster continued as an internet consultant, developing online marketing campaigns and consulting with clients on their websites. Even through recently, Plaster has continued to create custom websites for a number of artists and small businesses, specializing in arts-related websites (such as his own). It was the

economic downturn following the World Trade Center disaster that led Plaster to finally start his career as a public school teacher. Plaster is now in his sixth year of teaching in the public school system, where he is high school reading teacher at Lexington High School. When Plaster moved from Bristol back to NC to begin a teaching career, he downsized from a historic, 6,100 square foot house to a small, four-room house. He filled the largest U-Haul truck with whatever it would hold --his clothing, one set of bedroom furniture, just the bare essentials, and yes, his art equipment and supplies. He sold the entire, remaining contents of his house to a realtor looking for an investment. &quot;I did not realize it until it was too late that among those items was that box of my early artwork. Nothing could replace that. It was gone. And so I adjusted to the fact that all of those memories and traces of my early artistic development were gone forever. All I had left was the memories,&quot; he explained. Plaster had continued painting as an artist throughout his

Asheboro Magazine, May, 2011, Volume 1, Issue 10-We have some great articles this month for your reading pleasure. Mike Grant continues his series on the history of Randolph County with an article on Ordinaries, another name for taverns in the late 1700s. Artist Scott Plaster takes us on an emotional journey regarding the loss of his early work and how he got it back. Mrs. Happy Homemaker has us thinking about budgets, and what we can do to cut costs and save money by planning out menus for the week or the month. This is something Dave and I have often tried to do, but with her advice, we may be able to set a plan in motion and stick to it – because we go to the grocery store almost every day and that adds up! This month’s wine pick is Dave’s favorite new wine, and goes great with just about everything. Enjoy these and many other great articles this month in Asheboro Magazine. 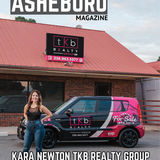