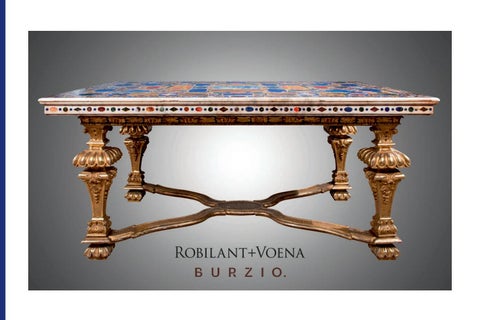 Right: The Medici and Westminster Tabletop in situ in Grosvenor House, London (former home of the Dukes of Westminster).

The Tabletop This magnificent Tabletop, designed by Giorgio Vasari for Francesco I de’Medici, Grand Duke of Tuscany, and executed by Bernardino di Porfirio da Leccio is an extraordinary work of art. It is an exceptionally rare example of Renaissance pietre dure–not only for its Medici provenance–but in that it only contains hardstones, which were much more difficult to obtain and to cut than colored marbles. Only one other table of this type, commissioned for Philip II of Spain (1556-1598) in 1587 and now in the Prado, is known. Additionally, the Medici Westminster Tabletop is the only one of the three 16th-century tables to retain its original border and inlaid apron. Pietre dure is long considered the pinnacle of Italian decorative arts. This type of work–inlay using colored hardstones–first flourished in Rome in the first half of the 16th century to adorn the interiors of churches and chapels. Soon after, pietre dure tabletops became expensive luxury items, reserved for a rarified few who had the means and access to commission them. The first tables inlaid with colored stones and marbles were ordered in Rome by Tuscans. Three tables from this period were designed and discussed by Vasari. Two were created for the Medici: Cosimo I and Francesco I, and one for Bindo Altoviti (1491-1557), which is now in the Banca di Roma, Rome. Long believed to be lost, the recent rediscovery of Francesco I’s table is enormously exciting for art historians and connoisseurs alike. The leading figure of Renaissance Roman pietre dure studies, Alvar Gonzalez Palacios, first viewed the Tabletop at the Duke of Westminster sale in 1959. He subsequently published the Tabletop in 1982, confirming its early date and comparing its quality to the Farnese Table in the Metropolitan Museum of Art. In Gonzalez Palacios’s 1990 publication, Cosimo I e le pietre dure, his colleague Fillipo Tuena, first proposed that the Tabletop is one of the two missing Medici pietre dure tabletops described by Vasari in the second edition of his Lives of the Artists (1568)1 and that the Tabletop was executed by the gem carver, Bernardino di Porfirio da Leccio for Francesco I. Francesco’s table was described by Vasari as composed “of jewels with rich ornament” (di gioie con ricco ornament). Tuena wrote of the Tabletop:

Not only is the quality and inlay sublime and one can find all of the stones mentioned by Vasari, but there are also very large lapis lazuli inserts, perhaps the largest known to be inserted in one of these tables. Contrary to what normally occurred in Roman production which preferred the presence of a few marble slabs of considerable size framed by a precious border, in this table we see a meticulous crushing and fantastical mix of hard stones that have few parallels in contemporary works. The presence of green jasper, used in the Grand Ducal workshops, and high quality of lapis lazuli, seems to have been only used in Florence, or could imply a Florentine commission. Certainly the perfection of the work and the preciousness of the material make it a work of great importance… In the autumn of 2017, the discovery of inventory numbers on the reverse of the Tabletop allowed Enrico Colle, director of the Museo Stibbert in Florence, to trace the Table in the Medici archives from an inventory of 1588, taken after Francesco I’s death, through to its sale by the Opificio to the Anglo-Italian artist and dealer William Blundell Spence (1814-1900). (Colle’s publication on the table is forthcoming). Spence counted Hugh Lupus Grosvenor (1825-1899), then the 3rd Marquess of Westminster, amongst his many aristocratic clients. In 1870 alone, he sold Grosvenor portraits by Moretto, Moroni, and Titian. As the Tabletop is soon after recorded in a photograph of July 1889 in the Gallery of Grosvenor House, London, it is highly likely that Spence’s acquisition of the Medici Westminster Tabletop was made on behalf of the 3rd Marquess, who had the title Duke of Westminster bestowed upon him by Queen Victoria in 1874.

1 His Excellency [Francesco] has also caused a beginning to be made with the executing of a table with precious stones, richly adorned, as an accompaniment to another belonging to his father, Duke Cosimo, finished not long ago after the design of Vasari, which is a rare work, being of oriental alabaster all inlaid with great pieces of jasper, heliotrope, cornelian, lapis lazuli, and agate, with other stones and jewels of price that are worth twenty thousand scudi. This table was executed by Bernardino di Porfirio of Leccio in the neighbourhood of Florence, who is excellent in such work, and who made for Messer Bindo Altoviti an octagonal table of ebony and ivory inlaid likewise with jaspers, after the design of the same Vasari; which Bernardino is now in the service of their Excellencies. (Vasari, Lives, vol. 3 p. 871)

The Commission Correspondence in 1568 between the leading patron of pietre dure in Rome, Cardinal Giovanni Ricci (1498-1574), and the Medici secretary, Bartolomeo Concini (1507-1578), first records that a table was to be made for Francesco deâ&#x20AC;&#x2122; Medici I, then the heir to the Grand Dukedom of Tuscany.2 Giorgio Vasari, the noted Renaissance artist and biographer, refers to the project later that year in the second edition of his Lives.3 According to Vasari, work on the Tabletop commenced in 1568: His Excellency [Francesco] has also caused a beginning to be made with the executing of a table with precious stones, richly adorned, as an accompaniment to another belonging to his father, Duke Cosimo, finished not long ago after the design of Vasari, which is a rare work, being of oriental alabaster all inlaid with great pieces of jasper, heliotrope, cornelian, lapis lazuli, and agate, with other stones and jewels of price that are worth twenty thousand scudi. This table was executed by Bernardino di Porfirio of Leccio in the neighborhood of Florence, who is excellent in such work, and who made for Messer Bindo Altoviti an octagonal table of ebony and ivory inlaid likewise with jaspers, after the design of the same Vasari; which Bernardino is now in the service of their Excellences.4 Two further contemporary accounts confirm that it took nearly ten years to finish, undoubtedly due to the difficulty obtaining the rare hardstones.5 What is distinctive about the design of the Tabletop is the extraordinarily large lapis lazuli panels, which were particularly hard to acquire.6 In 1575, the Duke of Ferraraâ&#x20AC;&#x2122;s ambassador to Florence, Hercole Cortile, visited the Casino where the table was being crafted and later wrote that he had been shown a table, which was: Truly a most beautiful thing to see, made of pieces of carnelian, heliotrope, lapis lazuli, jasper, agate and many other stones, very well set together and esteemed a most rare thing... and it remains unfinished.7

And October 1576, Nicolas Audebert of Orléans, advisor to the king of France, while on a tour through the Italian peninsula, also visited the Casino and wrote that work on the Tabletop was still in progress: One must not omit to view the house where the Grand Duke has gemstones worked, and see there the marble table covered in precious stones set together, which is not yet finished. However little remains [to be done], nevertheless it cannot be, I say, brought to perfection for [less than] 40,000 scudi.8 N.B. Anna Maria Giusti, former director of the Museo dell’Opificio delle Pietre Dure, recently re-published these records and suggested a terminus ante quem of c.1577 for this magnificent work of art.9

The Tabletop is one of three designed by Vasari. Another, commissioned by the banker Bindo Altoviti, is now in the collection of the Banco di Roma. Altoviti’s table is smaller and was not composed entirely of hardstones. The third table by Vasari, commissioned by Cosimo I de’Medici, father of Francesco I, and also executed to his design by Bernardino Porfirio da Leccio, is now lost. In the composition of its design, the Medici and Westminster Tabletop can be compared with a 16th century Florentine table now in the collection of the Hermitage, which has on occasion been proposed as one of Vasari’s missing commissions. What precludes the Hermitage table from this group is that it is built on a wooden, and not marble, support, which stands in contrast to contemporary accounts. A third important comparison–the only other exclusively pietre dure top known from the 16th century– is the table still located in the Pitti Palace, within the Museo degli Argenti. Interestingly, it is inscribed on its reverse with the number 859, which runs sequentially next to the ‘860’ assigned to the Medici and Westminster Table in the 1846 inventory. Tuena, however, explains in a 1990 article that stylistically the table is closer to the work of Buontalenti, opposed to Vasari. Indeed the Tabletop is an astonishing piece and is unparalleled in its quality, materials and provenance. The exquisite beauty of cut hardstones, masterfully composed, remind us of the wonder with which Vasari referred to the table as a tavola di gioa. The refined splendor of its design, the richness of its stones and the lavishness of it leave no ready comparison among the surviving 16th century Florentine tables, or for that matter, anything created subsequently.

in the frieze are carnelian, lapis and other jaspers. With its legs a framework of balustered walnut, with gold insertions. 2 3/4 braccia long by 1 3/4 braccia wide)

Pitti Palace, 1761 Inventory The Inventory shows that in the late 18th century, the Table has been returned to the ground floor, in one of the rooms of the present-day Museo degli Argenti which faces onto the unfinished courtyard, most likely in the Camera del Consiglio Inventario de I Mobili e di tutt’altro che si ritrova nell’Imperial Palazzo de’Pitti di Firenze fatto per la consegna a Carlo Gilles Guardaroba del medesimo a tutto il di’ 30 maggio 1761 (Inventory of furniture and all else found in the Imperial Pitti Palace of Florence, completed for Carlo Gilles [Master of the] Wardrobe there, 30 May 1761)

Pitti Palace, 1771 Inventory Ten years later, the table has been moved to today’s Sala dell’Iliade at the extreme left end of the piano nobile, a room named after its early-19th century frescos

Pitti Palace, 1815 Inventory, n.290 From 1815, the Table is listed precisely in all subsequent inventory records. It is placed on the ground floor, in one of the audience chambers named after Michelangelo Colonna Inventario dei Mobili e Biancherie dell’I. e R. Palazzo Pitti alla consegna del Guardaroba medesimo 1815 (Inventory of furniture and linen of the Imperial and Royal Pitti Palace in the custody of the [Master of the] Wardrobe, 1815)