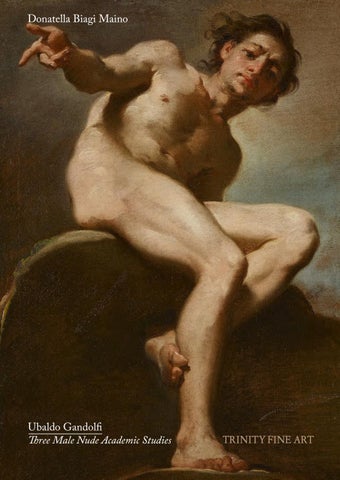 he academic studies under discussion in this paper are the mature work of Ubaldo Gandolfi and are most probably datable to the late 1750s, thus forming a new addition to the already substantial

corpus of this artist’s work. The paintings may be likened to a set of similar studies of models posing, D. Biagi Maino, Ubaldo Gandolfi, Turin 1990, p. 255, fig. 74.

in particular a Male Nude in the Molinari Pradelli collection1 (fig.1), it too conceived in a vertical position, and to the two Academic studies of a male nude in the Petrucci collection2 (figs. 2,3), this time in a horizontal position. Equally relevant to the practice of studies from life are a number of charcoal and sanguine drawings, including a Seated Male Nude and a Standing Male Nude seen from behind, in the Harvard Art Museum3 (figs. 4,5).  Splendid examples of Ubaldo Gandolfi’s skill in painting from life, the Three Academic Studies under discussion here come from a single collection and have presumably been together since the day they left his workshop. Alongside the works mentioned above, the three paintings make a major contribution to our knowledge of the way in which Ubaldo rendered motion and anatomy.

Never tiring of tackling the difficulties inherent in the study of subjects from life, Ubaldo began to exercise his skill in this field in his formative years and was to pursue it throughout his long career, following the teachings of certain crucial

figures whom he had the good fortune to encounter in Bologna, including most importantly Anton Raphael Mengs4 â&#x20AC;&#x201C; who praised the seeming ease with which he rendered the human body â&#x20AC;&#x201C; and Conte Francesco Algarotti, the man who

brought to Bologna the breath of fresh air coming from Europe in the grip of the Enlightenment. The practice in art academies – one of the most important of which was the

Accademia Clementina at the Istituto di Scienze in Bologna – was to organise sessions of drawing from life in a dedicated classroom5, around a platform on which drawing teachers would set their models – porters or janitors, but in any

case strapping young men – in poses useful for trying out the proper postures for depicting saints – St. Sebastian, in this instance – or the gods and heroes of ancient mythology whose stances were often based on Classical statues. This study was conducted in the evening, by candlelight, because daylight would have struck the model’s muscle structure too harshly. Ubaldo produced numerous very fine studies from life, displaying a certain

The image which appears on the frontispiace of Giampiero Zanotti’s Storia dell’Accademia Clementina di Bologna (Lelio dalla Volpe, Bologna 1739) interestingly reproduces a workshop session from life, with the model posing, teachers and pupils in attendance and a reproduction of the Farnese Hercules in the background.

in the Characterised Heads which we may consider to be the true masterpieces in his corpus of works6. Like the Characterised Heads, the three pictures under discussion here are the product of a highly individual sentivity free of the constraints imposed by patrons or by the subject being portrayed, and in that sense they allow Ubaldo to deploy his talent for interpreting the human body, imbuing posture and movement with vibrancy and truth, yet without losing anything of the formal definition of the figures’ muscle structure.

Fig. 4: Ubaldo Gandolfi, Seated Male Nude, charcoal on parchment, 28.6 x 42.9 cm, Harvard Art Museums The set of Characterised Heads, already fairly substantial when I wrote the above-mentioned monograph in 1990, has grown over time with the addition of further exemplars, all of the highest quality and revealing an intense psychological exploration of the sitter.

In this connection we may profitably look at the Male Nude seated on a rock, an extremely fine study in which the observer’s gaze is drawn from the foot in the foreground to the oratorial gesture of the hand, and in which the young model’s concentrated expression plays a crucial role in transforming a simple academic pose into a narrative element. Or the Male Nude seen from behind in a three-quarter pose, in which the skilled handling of light imparts immediacy and truth to a pose that would otherwise have been focused on rendering the figure’s muscle structure. Donatella Biagi Maino

baldo Gandolfi was born in San Matteo della Decima, near Bologna, on 14 October 1728. His father, a man of some standing in society, allowed him to move to Bologna when he was barely

over the age of ten in order to begin studying drawing. He studied under Felice Torelli before moving in 1748 to the school of Ercole Graziani the Younger. At the same time, he began to frequent the Accademia Clementina and won the much-prized Fiori Award for attendance and for quality in the depiction of the nude in 1746. His tireless practice of drawing from life, from posing models, which was to become a constant feature of his mindset, was organised under the academic teaching of Ercole Lelli, the anatomist who, the sources tell us, was his third master. His first public success came in 1759 in the shape of an altarpiece with the Assumption of the Virgin and Saints for Castel San Pietro, preceded by a bozzetto now in the Uffizi. The altarpiece owes a debt to the models of Guido Reni and of Ludovico and Annibale Carracci in the attitudes and gestures of its figures. Ubaldoâ&#x20AC;&#x2122;s renown grew to the point where he was made a full member of the Academy in 1760, and his work was to be sought even by the Empress Catherine II of Russia, while his colleagues in the Clementina entrusted him in 1766 with painting a fresco in the XIth Chapel in the Portico of St. Luke, depicting the Resurrection of Christ (the work for which our studies are preparatory drawings). The Resurrection is a magnificent example of Ubaldo Gandolfiâ&#x20AC;&#x2122;s grandiloquent and fervent style with its evocative and captivatingly theatrical character. For the senatorial nobility he produced ancient and modern myths, such as the figure of Aurora on the ceiling and of the Four Seasons represented by puttini playing in a room in the Palazzo Segni Facchini. In 1769 he painted frescoes for Conte Bentivoglio, who commissioned the decoration of the rooms on the ground floor of his palazzo in order to mark his term as gonfaloniere: â&#x20AC;&#x153;The beautiful Galleria was painted in chiaroscuro

by Antonio Bonetti, with the figures of Ubaldo Gandolfi, and in particular a Sacrifice” (Oretti, Cronica, c. 40): the Sacrifice to Minerva. But Ubaldo Gandolfi’s inspiration most solidly linked to spirit of place, to that concrete painting in which he best conveys the solidity of his bodies, of his figures, was to allow the artist to produce superb results in secular fables, for instance in the pictures painted for the gonfaloniere in 1770 depicting Perseus and Andromeda or Diana and Endymion and now in the municipal art collections, or the six mythological stories painted some time later for the Marescalchi, the Mercury and Argus in Lund, or the Bacchus and Ariadne in a private collection that can be added to his catalogue, in which the rich drapery of the woman’s gown is a tribute, in its fragmented design and in its colour, to the art of Donato Creti. The painter’s renown also grew in the field of religious painting thanks to his highly theatrical Baroque machines, such as the Medicina Altarpiece in the church of San Mamante with Christ in Glory and Saints or St. Francis Receiving the Stigmata, now in the Brera in Milan, a composition of empassioned rhetoric in its handling of gesture. This highly productive decade ended with a large canvas for the church of Sant’Agostino in Imola, depicting St. Nicholas of Tolentino Preaching to the Crowds. Graphic art is another area in which Ubaldo Gandolfi excelled, his drawings being very much in demand with collectors ever since the 18th century (all the leading international collections have several) and latterly the object of much in-depth study. Throughout his career Ubaldo Gandolfi produced portraits of young girls, children, apprentices, men and women portrayed from life, and old men with intensely real features. These works, for instance the Young Woman in the Louvre, were extremely popular in the 1770s. Ubaldo Gandolfi was appointed 14

to the presidency of the Accademia Clementina in 1772, holding on several occasions also the post of director of figure drawing in the courses. For his old Malvezzi patrons he painted a superb cycle of frescoes in the Caâ&#x20AC;&#x2122; Granda depicting the Choice of Hercules and his Apotheosis. Ubaldo Gandolfi died of malaria in Ravenna, where he had recently moved, on 24 July 1781.