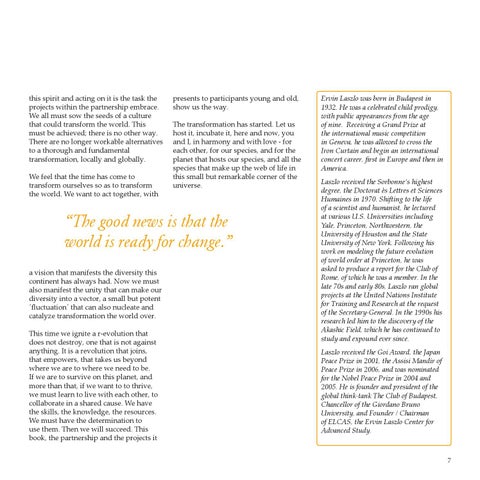 this spirit and acting on it is the task the projects within the partnership embrace. We all must sow the seeds of a culture that could transform the world. This must be achieved; there is no other way. There are no longer workable alternatives to a thorough and fundamental transformation, locally and globally. We feel that the time has come to transform ourselves so as to transform the world. We want to act together, with

presents to participants young and old, show us the way. The transformation has started. Let us host it, incubate it, here and now, you and I, in harmony and with love - for each other, for our species, and for the planet that hosts our species, and all the species that make up the web of life in this small but remarkable corner of the universe.

“The good news is that the world is ready for change.” a vision that manifests the diversity this continent has always had. Now we must also manifest the unity that can make our diversity into a vector, a small but potent ´fluctuation´ that can also nucleate and catalyze transformation the world over. This time we ignite a r-evolution that does not destroy, one that is not against anything. It is a revolution that joins, that empowers, that takes us beyond where we are to where we need to be. If we are to survive on this planet, and more than that, if we want to to thrive, we must learn to live with each other, to collaborate in a shared cause. We have the skills, the knowledge, the resources. We must have the determination to use them. Then we will succeed. This book, the partnership and the projects it

Ervin Laszlo was born in Budapest in 1932. He was a celebrated child prodigy, with public appearances from the age of nine. Receiving a Grand Prize at the international music competition in Geneva, he was allowed to cross the Iron Curtain and begin an international concert career, first in Europe and then in America. Laszlo received the Sorbonne’s highest degree, the Doctorat ès Lettres et Sciences Humaines in 1970. Shifting to the life of a scientist and humanist, he lectured at various U.S. Universities including Yale, Princeton, Northwestern, the University of Houston and the State University of New York. Following his work on modeling the future evolution of world order at Princeton, he was asked to produce a report for the Club of Rome, of which he was a member. In the late 70s and early 80s, Laszlo ran global projects at the United Nations Institute for Training and Research at the request of the Secretary-General. In the 1990s his research led him to the discovery of the Akashic Field, which he has continued to study and expound ever since. Laszlo received the Goi Award, the Japan Peace Prize in 2001, the Assisi Mandir of Peace Prize in 2006, and was nominated for the Nobel Peace Prize in 2004 and 2005. He is founder and president of the global think-tank The Club of Budapest, Chancellor of the Giordano Bruno University, and Founder / Chairman of ELCAS, the Ervin Laszlo Center for Advanced Study. Hosting Transformation: Stories from the Edge of Change making

Changemakers throughout Europe share their personal trials and triumphs in this candid invitation to readers to host their own transformatio...

Hosting Transformation: Stories from the Edge of Change making

Changemakers throughout Europe share their personal trials and triumphs in this candid invitation to readers to host their own transformatio...