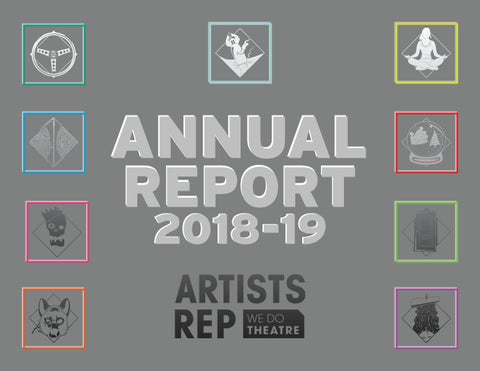 The 2018/19 season marked our 36th year where we invited our community to engage with the nation’s most imaginative playwrights in original productions by Portland’s most accomplished theatre makers. This season we also said farewell to the Alder Stage for the transformation of our building at 1515 Morrison into a space designed specifically for our theatre and the ArtsHub, making a home that will serve our artists and audiences for decades ahead. The season began with Dominique Morisseau’s SKELETON CREW, starring a brilliant ensemble of four on the detailed set of a Detroit auto factory break room. This largely naturalistic story featured the ensemble work of three dancers (two from Portland Actors Conservatory - a member of the ArtsHub), whose movements in silhouette captured the energy of the factory floor. We moved to Bess Wohl’s SMALL MOUTH SOUNDS, set during a silent retreat where 85% of the action was silent and the ensemble of eight actors created fully-realized characters without words. There was laughter and tears and in the rare moments when characters spoke, the audience was bowled over with empathy for each of these strangers. We entered the holiday season with two plays running in two venues. IT’S A WONDERFUL LIFE: A LIVE RADIO PLAY by Joe Landry (performed at Northwest Children’s Theatre) never failed to catch audiences by surprise, especially the magical moment when the cast dropped their scripts and played the final scene “off-book,” as if they were possessed by the story. On the Alder Stage, we took on the one-of-a-kind feat of performing Branden Jacobs-Jenkins’ EVERYBODY, his infinitely-demanding adaptation of the medieval morality play EVERYMAN, where fearless ensemble members were assigned their roles in front of the audience every night. 2019 kicked off with TEENAGE DICK by Mike Lew whose high school set adaptation of RICHARD III was dark, hilarious, and ultimately tragic. Lew’s script mandated that the two characters written as having disabilities be played by actors with disabilities. This was a major milestone in the history of Artists Rep in which two artists with disabilities shared the stage in a main stage production. We’re inspired to make sure that in the future, inclusion and representation becomes the norm rather than the exception. In March 2019 we closed the final Artists Rep production in the beloved Alder Stage with Lucas Hnath’s A DOLL’S HOUSE, PART 2. Resident Artist and Co-Founder Vana O’Brien holds the privilege of having performed in the first and final productions on that stage. Patrons were awed by the way the actors and the designers subverted the play’s 19th century setting, letting the play somehow live in the past and present simultaneously. The World Premiere WOLF PLAY by Hansol Jung continued our commitment to fostering new work. Jung created a funny, honest, and emotionally wrenching theatre experience filled with bold, poetic gestures—including using a faceless puppet to embody the central character of an 8-year-old boy caught up in a custody fight. It all built to a devastating payoff: the moment when the puppeteer coldly abandoned the doll, leaving it lifeless in a chair on the otherwise empty stage. We wrapped up the season with Lauren Gunderson’s THE REVOLUTIONISTS. Some of the character’s words felt as if they were written for Artists Rep and to our audiences, at this moment of our own revolution: “Thank you. For your time. For listening. Thank you. It’s an honor to…stand before you.” Additionally, we partnered with PICA to present UNEXPLODED ORDNANCES in the Time-Based Arts Festival, built sets for ArtsHub companies, provided operational support to outstanding productions by Profile Theatre, Hand2Mouth, and PAC, and kept our stages and rehearsal spaces filled to capacity until we slowed down to prepare for our big move in May. Despite the shortened season, we still managed to open our doors for 340 public events. We made important strides with Table|Room|Stage, our new play development program; in our Education programming; in developing an equitable, diverse, and inclusive culture onstage and off; and in creating a sustainable future home for Artists Rep. Thank you for believing in this work, and for being a vital part of the ART community.

and provide a h ome for a dive rse to

ARTISTS REP gratefully acknowledges our theatre rests on the traditional lands of the Multnomah, Wasco, Cowlitz, Kathlamet, Clackamas, Bands of Chinook, Tualatin Kalapuya, Molalla and many other tribes who made their homes along the Columbia River.

THE 2018/19 SEASON WAS MADE POSSIBLE BY OUR SEASON SPONSORS:

Artists Rep’s Generator of New Work for the American Stage We seek out writers and plays that disturb -- in the best way -- our perceptions and presumptions, that plunge us into stories to imbue us with empathy through discovered kinship with the other. Through productions, commissions, workshops, readings, and dramaturgical support, we enable national and local playwrights to pursue their bold, theatrically ambitious ideas. We are committed to promoting underrepresented voices: women, gender nonconforming, and people of color and recognize the exhilarating, necessary perspectives they bring to our national conversation. New this year is our AT THE APEX program, that centers new work in our mainstage season with premieres and vital second productions of important new plays. In At the Apex, playwrights will see their work fully realized, participate in rehearsals, and hone the work to its keenest edge. It’s true that change begins at home. We are aware of our own organization’s role as a mainstream cultural institution in Portland. Our long-term goal is to become a model of excellence in how an arts organization can be expansively inclusive, dynamically diverse, and committed to equity in every aspect. In the short term, our goal is to educate and organize ourselves optimally to reach these ideals.

LOOKING FOR TIGER LILY by Anthony Hudson Developmental workshops through T|R|S Public Presentation partnered with Portland Shakespeare Project and Proscenium Live, an ArtsHub Resident Company Moved on to be an At the Apex full production on the Artists Rep mainstage in the 19/20 season

Artists Rep offers a variety of price and entry points for its classes, with scholarships and sliding scale options available for all programs. We also offer an innovative Student Ambassador Program, where students learn about the inner-workings of a major nonprofit professional theatre. Ambassadors meet once per month, see shows for free, and participate in discussions with leading theatre artists, and professionals. The program introduces students to the full range of skills and ideas that are essential to running a professional theatre and to foster the next generation of arts leaders. Our free student matinee program aims to greatly increase the number of young people who have access to world-class theatre. Working in collaboration with educators, we seek to reduce barriers to participation and create curriculum-based study guides and talk-backs that promote critical thinking and help frame important conversations

around art. In 2018, ART launched a new workshop program to enhance the student experience and delve deeper into what makes live performance so meaningful. These workshops are taught by our Resident Artists who lead students through a participatory hour that focuses on skill building, collaboration, and theatre exercises that get students up on their feet and thinking creatively.

Artists Rep offers a number of participatory education and engagement opportunities for people of all ages. These include free student matinees and workshops, talk-backs, panel discussions, dramaturgy series for audience members, and over 25 classes that develop theatre artists, arts professionals, community members, and students.

by supporting Portlandâ&amp;#x20AC;&amp;#x2122;s rich artistic ecosystem. Programs and services include deeply discounted rates for rehearsal, performance, and meeting space; shared administrative work space for individuals and organizations; and production services such as set construction, scenic painting, and professional technical support from design through performance. Our goal is to help a diverse range of arts and community organizations thrive. We prioritize artists and organizations that support ARTâ&amp;#x20AC;&amp;#x2122;s values of equity, diversity, and inclusion, and seek to provide a home for a diverse community of artists and audiences to take creative risks. While the programâ&amp;#x20AC;&amp;#x2122;s origin six years ago was in response to an opportunity to share underutilized performance space, we have found that the most vital and lasting impact of the ArtsHub is the bustling community that has been formed, and the myriad ways it has led to the empowerment of local artists and the accelerated growth of participating organizations. On any given day, staff members and dozens of artists from multiple arts and community organizations are rehearsing, utilizing administrative support and meeting spaces, with chance encounters in shared spaces leading to increased communication and unanticipated future collaborations between organizations. Our new facility is being designed so that the ArtsHub can include even more organizations than it currently serves.

The mission of the ArtsHub is to create a cultural center

The Campaign for Artists Repertory Theatre

ART’s downtown block was originally an Elks Lodge health club. Our building has truly reached the end of its useful life. Sections of the building lacked heat, the roof leaked, and the only way to move from the ground floor to the top floor was by climbing a staircase or by circling the block on the sidewalk. Clearly, the reinvention of our building is a priority. A $7.1 million gift in 2018 kicked off our capital campaign, paid off our mortgage, and catalyzed the sale of the north half of the downtown block in July of 2019 to Wood Partners for $9 million. Wood Partners will be building the Alta Art Tower – 22 stories with 304 one-, two-, and three-bedroom apartments. This is one of the first buildings to be built under Portland’s new inclusionary zoning rules – ten percent of the apartments will be rented at 60 percent of median income for sixty years. The $9 million received

STORYTELLING AT ITS BEST

As Portland’s oldest professional theatre, we are master storytellers and have a legacy of producing acclaimed regional and world premieres.

in the sale becomes the lead investment for reimagining our remaining building on the south half of the block, in which the roof and a massive wood beam will rise to create a modern multiuse performing arts center with two theatres, four rehearsal halls, and collaborative spaces. We are working with an extraordinary design team - Lever Architecture, Fisher Dachs Theatre Design Consultants, Howard S. Wright contractors, and Shiels Obletz Johnsen as our owner’s representative. It is our intention to be displaced from our building during ART On Tour for only two seasons – moving back in August 2021 for the 21/22 season.

not just for ART

The ArtsHub has met the challenge of Portland’s lack of affordable performance and rehearsal space by providing programs and services that help smaller arts and community organizations thrive.

We can build a legacy of understanding through stories that make our world a better place. Please, join in, help ART RISE.

” The future of ART

ES THAT MAKE SENSE OF THE MODERN WORLD. NG OF EQUAL QUALITY TO ART’S ARTISTIC WORK. ND’S ARTISTIC ECOSYSTEM THROUGH THE ARTSHUB.

ART is pleased to provide this snapshot of our year and financial position to our stakeholders. These statements have been audited and an unqualified opinion provided by the firm of Winkel Accounting and Advisory Services. The full audit is available on ARTâ&amp;#x20AC;&amp;#x2122;s website at www.artistsrep.org/about/financials/. 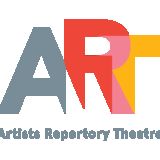