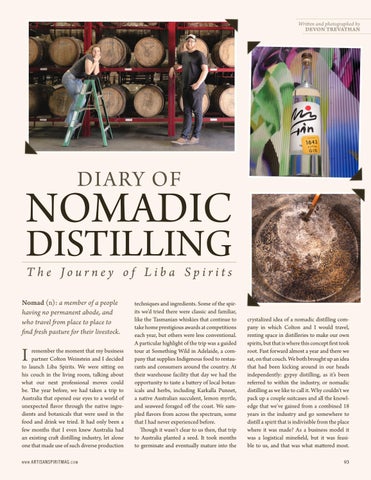 Written and photographed by DEVON TREVATHAN

Nomad (n): a member of a people having no permanent abode, and who travel from place to place to find fresh pasture for their livestock.

remember the moment that my business partner Colton Weinstein and I decided to launch Liba Spirits. We were sitting on his couch in the living room, talking about what our next professional moves could be. The year before, we had taken a trip to Australia that opened our eyes to a world of unexpected flavor through the native ingredients and botanicals that were used in the food and drink we tried. It had only been a few months that I even knew Australia had an existing craft distilling industry, let alone one that made use of such diverse production W W W . ARTISANSPIRITMAG . C O M

techniques and ingredients. Some of the spirits we’d tried there were classic and familiar, like the Tasmanian whiskies that continue to take home prestigious awards at competitions each year, but others were less conventional. A particular highlight of the trip was a guided tour at Something Wild in Adelaide, a company that supplies Indigenous food to restaurants and consumers around the country. At their warehouse facility that day we had the opportunity to taste a battery of local botanicals and herbs, including Karkalla Punnet, a native Australian succulent, lemon myrtle, and seaweed foraged off the coast. We sampled flavors from across the spectrum, some that I had never experienced before. Though it wasn’t clear to us then, that trip to Australia planted a seed. It took months to germinate and eventually mature into the

crystalized idea of a nomadic distilling company in which Colton and I would travel, renting space in distilleries to make our own spirits, but that is where this concept first took root. Fast forward almost a year and there we sat, on that couch. We both brought up an idea that had been kicking around in our heads independently: gypsy distilling, as it’s been referred to within the industry, or nomadic distilling as we like to call it. Why couldn’t we pack up a couple suitcases and all the knowledge that we’ve gained from a combined 18 years in the industry and go somewhere to distill a spirit that is indivisible from the place where it was made? As a business model it was a logistical minefield, but it was feasible to us, and that was what mattered most. 93