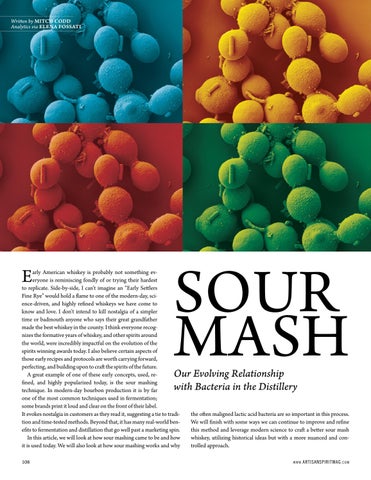 arly American whiskey is probably not something everyone is reminiscing fondly of or trying their hardest to replicate. Side-by-side, I can’t imagine an “Early Settlers Fine Rye” would hold a flame to one of the modern-day, science-driven, and highly refined whiskeys we have come to know and love. I don’t intend to kill nostalgia of a simpler time or badmouth anyone who says their great grandfather made the best whiskey in the county. I think everyone recognizes the formative years of whiskey, and other spirits around the world, were incredibly impactful on the evolution of the spirits winning awards today. I also believe certain aspects of those early recipes and protocols are worth carrying forward, perfecting, and building upon to craft the spirits of the future. A great example of one of these early concepts, used, refined, and highly popularized today, is the sour mashing technique. In modern-day bourbon production it is by far one of the most common techniques used in fermentation; some brands print it loud and clear on the front of their label. It evokes nostalgia in customers as they read it, suggesting a tie to tradition and time-tested methods. Beyond that, it has many real-world benefits to fermentation and distillation that go well past a marketing spin. In this article, we will look at how sour mashing came to be and how it is used today. We will also look at how sour mashing works and why

Our Evolving Relationship with Bacteria in the Distillery

the often maligned lactic acid bacteria are so important in this process. We will finish with some ways we can continue to improve and refine this method and leverage modern science to craft a better sour mash whiskey, utilizing historical ideas but with a more nuanced and controlled approach. W W W . ARTISANSPIRITMAG . C O M