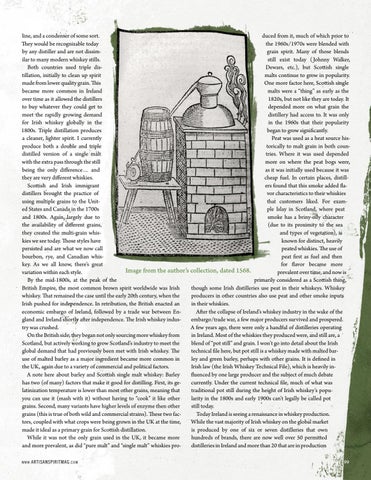 duced from it, much of which prior to line, and a condenser of some sort. the 1960s/1970s were blended with They would be recognizable today grain spirit. Many of those blends by any distiller and are not dissimstill exist today ( Johnny Walker, ilar to many modern whiskey stills. Dewars, etc.), but Scottish single Both countries used triple dismalts continue to grow in popularity. tillation, initially to clean up spirit One more factor here, Scottish single made from lower quality grain. This malts were a “thing” as early as the became more common in Ireland 1820s, but not like they are today. It over time as it allowed the distillers depended more on what grain the to buy whatever they could get to distillery had access to. It was only meet the rapidly growing demand in the 1960s that their popularity for Irish whiskey globally in the began to grow significantly. 1800s. Triple distillation produces Peat was used as a heat source hisa cleaner, lighter spirit. I currently torically to malt grain in both counproduce both a double and triple tries. Where it was used depended distilled version of a single malt more on where the peat bogs were, with the extra pass through the still as it was initially used because it was being the only difference… and cheap fuel. In certain places, distillthey are very different whiskies. ers found that this smoke added flaScottish and Irish immigrant vor characteristics to their whiskies distillers brought the practice of that customers liked. For examusing multiple grains to the Unitple Islay in Scotland, where peat ed States and Canada in the 1700s smoke has a briny-oily character and 1800s. Again, largely due to (due to its proximity to the sea the availability of different grains, and types of vegetation), is they created the multi-grain whisknown for distinct, heavily kies we see today. Those styles have peated whiskies. The use of persisted and are what we now call peat first as fuel and then bourbon, rye, and Canadian whisfor flavor became more key. As we all know, there’s great Image from the author’s collection, dated 1568. prevalent over time, and now is variation within each style. primarily considered as a Scottish thing, By the mid-1800s, at the peak of the though some Irish distilleries use peat in their whiskeys. Whiskey British Empire, the most common brown spirit worldwide was Irish producers in other countries also use peat and other smoke inputs whiskey. That remained the case until the early 20th century, when the in their whiskies. Irish pushed for independence. In retribution, the British enacted an After the collapse of Ireland’s whiskey industry in the wake of the economic embargo of Ireland, followed by a trade war between Enembargo/trade war, a few major producers survived and prospered. gland and Ireland shortly after independence. The Irish whiskey indusA few years ago, there were only a handful of distilleries operating try was crushed. in Ireland. Most of the whiskies they produced were, and still are, a On the British side, they began not only sourcing more whiskey from blend of “pot still” and grain. I won’t go into detail about the Irish Scotland, but actively working to grow Scotland’s industry to meet the technical file here, but pot still is a whiskey made with malted barglobal demand that had previously been met with Irish whiskey. The ley and green barley, perhaps with other grains. It is defined in use of malted barley as a major ingredient became more common in Irish law (the Irish Whiskey Technical File), which is heavily inthe UK, again due to a variety of commercial and political factors. fluenced by one large producer and the subject of much debate A note here about barley and Scottish single malt whiskey: Barley currently. Under the current technical file, much of what was has two (of many) factors that make it good for distilling. First, its getraditional pot still during the height of Irish whiskey’s populatinization temperature is lower than most other grains, meaning that larity in the 1800s and early 1900s can’t legally be called pot you can use it (mash with it) without having to “cook” it like other still today. grains. Second, many variants have higher levels of enzyme then other Today Ireland is seeing a renaissance in whiskey production. grains (this is true of both wild and commercial strains). These two facWhile the vast majority of Irish whiskey on the global market tors, coupled with what crops were being grown in the UK at the time, is produced by one of six or seven distilleries that own made it ideal as a primary grain for Scottish distillation. hundreds of brands, there are now well over 50 permitted While it was not the only grain used in the UK, it became more distilleries in Ireland and more than 20 that are in production and more prevalent, as did “pure malt” and “single malt” whiskies proW W W . ARTISANSPIRITMAG . C O M