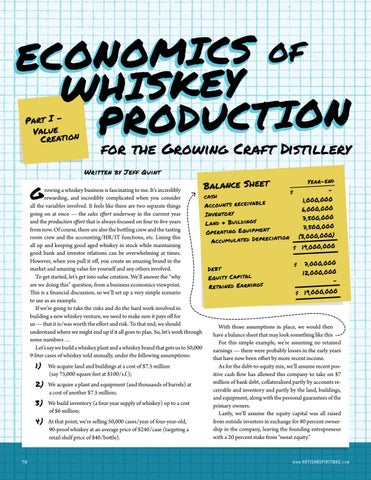 for the Growing Craft Distillery

rowing a whiskey business is fascinating to me. It’s incredibly rewarding, and incredibly complicated when you consider all the variables involved. It feels like there are two separate things going on at once — the sales effort underway in the current year and the production effort that is always focused on four to five years from now. Of course, there are also the bottling crew and the tasting room crew and the accounting/HR/IT functions, etc. Lining this all up and keeping good aged whiskey in stock while maintaining good bank and investor relations can be overwhelming at times. However, when you pull it off, you create an amazing brand in the $ 7,000,000 market and amazing value for yourself and any others involved. Debt 12,000,000 To get started, let’s get into value creation. We’ll answer the “why Equity Capital are we doing this” question, from a business economics viewpoint. Retained Earnings This is a financial discussion, so we’ll set up a very simple scenario $ 19,000,000 to use as an example. If we’re going to take the risks and do the hard work involved in building a new whiskey venture, we need to make sure it pays off for us — that it is/was worth the effort and risk. To that end, we should With those assumptions in place, we would then understand where we might end up if it all goes to plan. So, let’s work through have a balance sheet that may look something like this some numbers … For this simple example, we’re assuming no retained Let’s say we build a whiskey plant and a whiskey brand that gets us to 50,000 earnings — there were probably losses in the early years 9-liter cases of whiskey sold annually, under the following assumptions: that have now been offset by more recent income. We acquire land and buildings at a cost of $7.5 million As for the debt-to-equity mix, we’ll assume recent pos1) (say 75,000 square feet at $100/s.f.); itive cash flow has allowed this company to take on $7 million of bank debt, collateralized partly by accounts re2 ) We acquire a plant and equipment (and thousands of barrels) at ceivable and inventory and partly by the land, buildings, a cost of another $7.5 million; and equipment, along with the personal guarantees of the 3 ) We build inventory (a four-year supply of whiskey) up to a cost primary owners. of $6 million; Lastly, we’ll assume the equity capital was all raised from outside investors in exchange for 80 percent owner4 ) At that point, we’re selling 50,000 cases/year of four-year-old, ship in the company, leaving the founding entrepreneur 90-proof whiskey at an average price of $240/case (targeting a with a 20 percent stake from “sweat equity.” retail shelf price of $40/bottle).