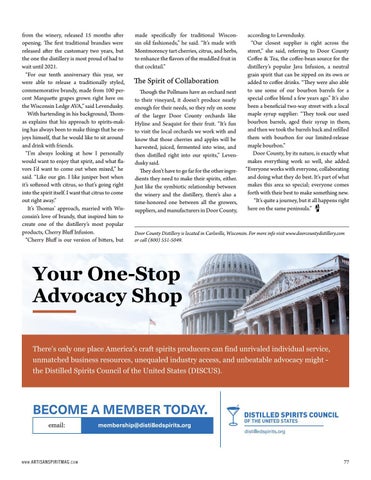 from the winery, released 15 months after opening. The first traditional brandies were released after the customary two years, but the one the distillery is most proud of had to wait until 2021. “For our tenth anniversary this year, we were able to release a traditionally styled, commemorative brandy, made from 100 percent Marquette grapes grown right here on the Wisconsin Ledge AVA,” said Levendusky. With bartending in his background, Thomas explains that his approach to spirits-making has always been to make things that he enjoys himself, that he would like to sit around and drink with friends. “I’m always looking at how I personally would want to enjoy that spirit, and what flavors I’d want to come out when mixed,” he said. “Like our gin. I like juniper best when it’s softened with citrus, so that’s going right into the spirit itself. I want that citrus to come out right away.” It’s Thomas’ approach, married with Wisconsin’s love of brandy, that inspired him to create one of the distillery’s most popular products, Cherry Bluff Infusion. “Cherry Bluff is our version of bitters, but

made specifically for traditional Wisconsin old fashioneds,” he said. “It’s made with Montmorency tart cherries, citrus, and herbs, to enhance the flavors of the muddled fruit in that cocktail.”

The Spirit of Collaboration Though the Pollmans have an orchard next to their vineyard, it doesn’t produce nearly enough for their needs, so they rely on some of the larger Door County orchards like Hyline and Seaquist for their fruit. “It’s fun to visit the local orchards we work with and know that those cherries and apples will be harvested, juiced, fermented into wine, and then distilled right into our spirits,” Levendusky said. They don’t have to go far for the other ingredients they need to make their spirits, either. Just like the symbiotic relationship between the winery and the distillery, there’s also a time-honored one between all the growers, suppliers, and manufacturers in Door County,

according to Levendusky. “Our closest supplier is right across the street,” she said, referring to Door County Coffee &amp; Tea, the coffee-bean source for the distillery’s popular Java Infusion, a neutral grain spirit that can be sipped on its own or added to coffee drinks. “They were also able to use some of our bourbon barrels for a special coffee blend a few years ago.” It’s also been a beneficial two-way street with a local maple syrup supplier: “They took our used bourbon barrels, aged their syrup in them, and then we took the barrels back and refilled them with bourbon for our limited-release maple bourbon.” Door County, by its nature, is exactly what makes everything work so well, she added. “Everyone works with everyone, collaborating and doing what they do best. It’s part of what makes this area so special; everyone comes forth with their best to make something new. “It’s quite a journey, but it all happens right here on the same peninsula.”