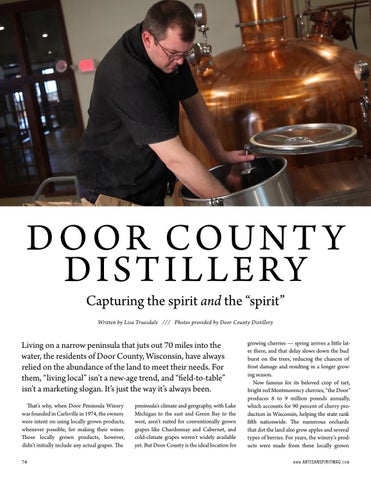 Living on a narrow peninsula that juts out 70 miles into the water, the residents of Door County, Wisconsin, have always relied on the abundance of the land to meet their needs. For them, “living local” isn’t a new-age trend, and “field-to-table” isn’t a marketing slogan. It’s just the way it’s always been. That’s why, when Door Peninsula Winery was founded in Carlsville in 1974, the owners were intent on using locally grown products, whenever possible, for making their wines. Those locally grown products, however, didn’t initially include any actual grapes. The 74

peninsula’s climate and geography, with Lake Michigan to the east and Green Bay to the west, aren’t suited for conventionally grown grapes like Chardonnay and Cabernet, and cold-climate grapes weren’t widely available yet. But Door County is the ideal location for

growing cherries — spring arrives a little later there, and that delay slows down the bud burst on the trees, reducing the chances of frost damage and resulting in a longer growing season. Now famous for its beloved crop of tart, bright red Montmorency cherries, “the Door” produces 8 to 9 million pounds annually, which accounts for 90 percent of cherry production in Wisconsin, helping the state rank fifth nationwide. The numerous orchards that dot the land also grow apples and several types of berries. For years, the winery’s products were made from these locally grown W W W . ARTISANSPIRITMAG . C O M