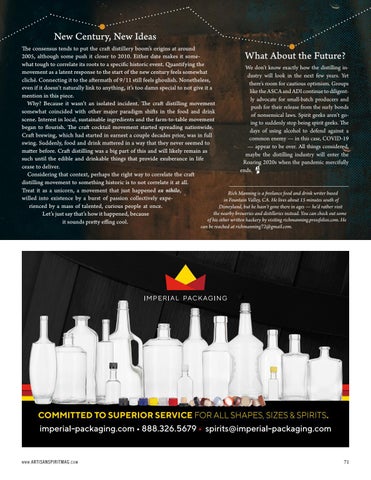 New Century, New Ideas The consensus tends to put the craft distillery boom’s origins at around 2005, although some push it closer to 2010. Either date makes it somewhat tough to correlate its roots to a specific historic event. Quantifying the We don’t know exactly how the distilling inmovement as a latent response to the start of the new century feels somewhat dustry will look in the next few years. Yet cliché. Connecting it to the aftermath of 9/11 still feels ghoulish. Nonetheless, there’s room for cautious optimism. Groups even if it doesn’t naturally link to anything, it’s too damn special to not give it a like the ASCA and ADI continue to diligentmention in this piece. ly advocate for small-batch producers and Why? Because it wasn’t an isolated incident. The craft distilling movement push for their release from the surly bonds somewhat coincided with other major paradigm shifts in the food and drink of nonsensical laws. Spirit geeks aren’t goscene. Interest in local, sustainable ingredients and the farm-to-table movement ing to suddenly stop being spirit geeks. The began to flourish. The craft cocktail movement started spreading nationwide. days of using alcohol to defend against a Craft brewing, which had started in earnest a couple decades prior, was in full common enemy — in this case, COVID-19 swing. Suddenly, food and drink mattered in a way that they never seemed to — appear to be over. All things considered, matter before. Craft distilling was a big part of this and will likely remain as maybe the distilling industry will enter the such until the edible and drinkable things that provide exuberance in life Roaring 2020s when the pandemic mercifully cease to deliver. ends. Considering that context, perhaps the right way to correlate the craft distilling movement to something historic is to not correlate it at all. Treat it as a unicorn, a movement that just happened ex nihilo, Rich Manning is a freelance food and drink writer based willed into existence by a burst of passion collectively expein Fountain Valley, CA. He lives about 15 minutes south of rienced by a mass of talented, curious people at once. Disneyland, but he hasn’t gone there in ages — he’d rather visit the nearby breweries and distilleries instead. You can check out some Let’s just say that’s how it happened, because of his other written hackery by visiting richmanning.pressfolios.com. He it sounds pretty effing cool.

What About the Future?

can be reached at richmanning72@gmail.com.

COMMITTED TO SUPERIOR SERVICE FOR ALL SHAPES, SIZES &amp; SPIRITS.