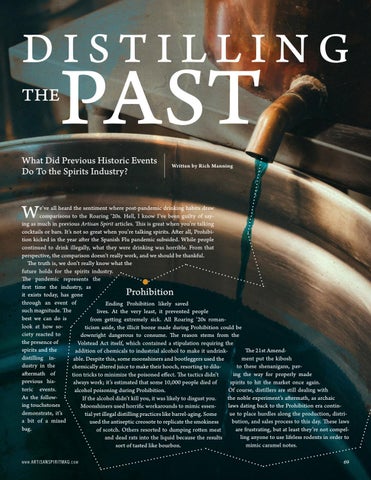 What Did Previous Historic Events Do To the Spirits Industry?

e’ve all heard the sentiment where post-pandemic drinking habits draw comparisons to the Roaring ‘20s. Hell, I know I’ve been guilty of saying as much in previous Artisan Spirit articles. This is great when you’re talking cocktails or bars. It’s not so great when you’re talking spirits. After all, Prohibition kicked in the year after the Spanish Flu pandemic subsided. While people continued to drink illegally, what they were drinking was horrible. From that perspective, the comparison doesn’t really work, and we should be thankful. The truth is, we don’t really know what the future holds for the spirits industry. The pandemic represents the first time the industry, as it exists today, has gone through an event of Ending Prohibition likely saved such magnitude. The lives. At the very least, it prevented people best we can do is from getting extremely sick. All Roaring ‘20s romanlook at how soticism aside, the illicit booze made during Prohibition could be ciety reacted to downright dangerous to consume. The reason stems from the the presence of Volstead Act itself, which contained a stipulation requiring the spirits and the The 21st Amendaddition of chemicals to industrial alcohol to make it undrinkdistilling inment put the kibosh able. Despite this, some moonshiners and bootleggers used the dustry in the to these shenanigans, pavchemically altered juice to make their hooch, resorting to diluaftermath of ing the way for properly made tion tricks to minimize the poisoned effect. The tactics didn’t previous hisspirits to hit the market once again. always work; it’s estimated that some 10,000 people died of toric events. Of course, distillers are still dealing with alcohol poisoning during Prohibition. As the followthe noble experiment’s aftermath, as archaic If the alcohol didn’t kill you, it was likely to disgust you. ing touchstones laws dating back to the Prohibition era continMoonshiners used horrific workarounds to mimic essendemonstrate, it’s ue to place hurdles along the production, distritial yet illegal distilling practices like barrel-aging. Some a bit of a mixed bution, and sales process to this day. These laws used the antiseptic creosote to replicate the smokiness bag. are frustrating, but at least they’re not compelof scotch. Others resorted to dumping rotten meat ling anyone to use lifeless rodents in order to and dead rats into the liquid because the results mimic caramel notes. sort of tasted like bourbon.