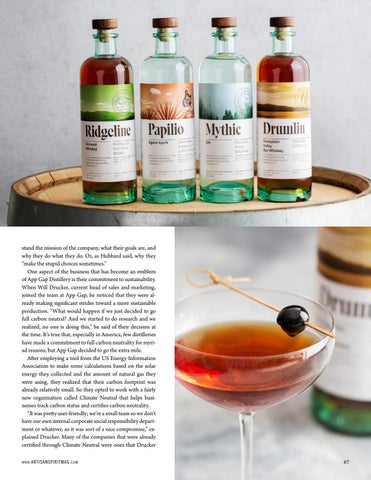 stand the mission of the company, what their goals are, and why they do what they do. Or, as Hubbard said, why they “make the stupid choices sometimes.” One aspect of the business that has become an emblem of App Gap Distillery is their commitment to sustainability. When Will Drucker, current head of sales and marketing, joined the team at App Gap, he noticed that they were already making significant strides toward a more sustainable production. “What would happen if we just decided to go full carbon neutral? And we started to do research and we realized, no one is doing this,” he said of their decision at the time. It’s true that, especially in America, few distilleries have made a commitment to full carbon neutrality for myriad reasons, but App Gap decided to go the extra mile. After employing a tool from the US Energy Information Association to make some calculations based on the solar energy they collected and the amount of natural gas they were using, they realized that their carbon footprint was already relatively small. So they opted to work with a fairly new organization called Climate Neutral that helps businesses track carbon status and certifies carbon neutrality. “It was pretty user-friendly; we’re a small team so we don’t have our own internal corporate social responsibility department or whatever, so it was sort of a nice compromise,” explained Drucker. Many of the companies that were already certified through Climate Neutral were ones that Drucker W W W . ARTISANSPIRITMAG . C O M