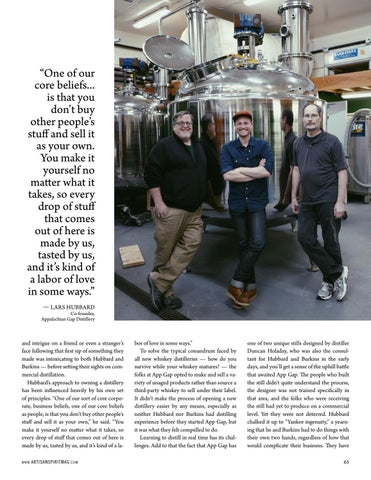 “One of our core beliefs... is that you don’t buy other people’s stuff and sell it as your own. You make it yourself no matter what it takes, so every drop of stuff that comes out of here is made by us, tasted by us, and it’s kind of a labor of love in some ways.” — LARS HUBBARD

and intrigue on a friend or even a stranger’s face following that first sip of something they made was intoxicating to both Hubbard and Burkins — before setting their sights on commercial distillation. Hubbard’s approach to owning a distillery has been influenced heavily by his own set of principles. “One of our sort of core corporate, business beliefs, one of our core beliefs as people, is that you don’t buy other people’s stuff and sell it as your own,” he said. “You make it yourself no matter what it takes, so every drop of stuff that comes out of here is made by us, tasted by us, and it’s kind of a laW W W . ARTISANSPIRITMAG . C O M

bor of love in some ways.” To solve the typical conundrum faced by all new whiskey distilleries — how do you survive while your whiskey matures? — the folks at App Gap opted to make and sell a variety of unaged products rather than source a third-party whiskey to sell under their label. It didn’t make the process of opening a new distillery easier by any means, especially as neither Hubbard nor Burkins had distilling experience before they started App Gap, but it was what they felt compelled to do. Learning to distill in real time has its challenges. Add to that the fact that App Gap has

one of two unique stills designed by distiller Duncan Holaday, who was also the consultant for Hubbard and Burkins in the early days, and you’ll get a sense of the uphill battle that awaited App Gap. The people who built the still didn’t quite understand the process, the designer was not trained specifically in that area, and the folks who were receiving the still had yet to produce on a commercial level. Yet they were not deterred. Hubbard chalked it up to “Yankee ingenuity,” a yearning that he and Burkins had to do things with their own two hands, regardless of how that would complicate their business. They have 65