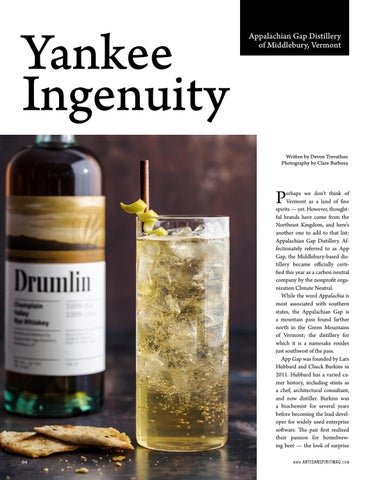 erhaps we don’t think of Vermont as a land of fine spirits — yet. However, thoughtful brands have come from the Northeast Kingdom, and here’s another one to add to that list: Appalachian Gap Distillery. Affectionately referred to as App Gap, the Middlebury-based distillery became officially certified this year as a carbon neutral company by the nonprofit organization Climate Neutral. While the word Appalachia is most associated with southern states, the Appalachian Gap is a mountain pass found farther north in the Green Mountains of Vermont; the distillery for which it is a namesake resides just southwest of the pass. App Gap was founded by Lars Hubbard and Chuck Burkins in 2011. Hubbard has a varied career history, including stints as a chef, architectural consultant, and now distiller. Burkins was a biochemist for several years before becoming the lead developer for widely used enterprise software. The pair first realized their passion for homebrewing beer — the look of surprise 64