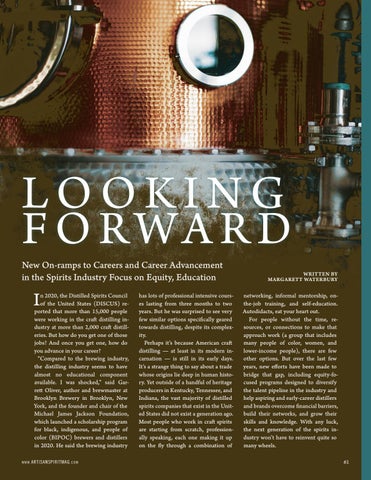 n 2020, the Distilled Spirits Council of the United States (DISCUS) reported that more than 15,000 people were working in the craft distilling industry at more than 2,000 craft distilleries. But how do you get one of those jobs? And once you get one, how do you advance in your career? “Compared to the brewing industry, the distilling industry seems to have almost no educational component available. I was shocked,” said Garrett Oliver, author and brewmaster at Brooklyn Brewery in Brooklyn, New York, and the founder and chair of the Michael James Jackson Foundation, which launched a scholarship program for black, indigenous, and people of color (BIPOC) brewers and distillers in 2020. He said the brewing industry

has lots of professional intensive courses lasting from three months to two years. But he was surprised to see very few similar options specifically geared towards distilling, despite its complexity. Perhaps it’s because American craft distilling — at least in its modern incarnation — is still in its early days. It’s a strange thing to say about a trade whose origins lie deep in human history. Yet outside of a handful of heritage producers in Kentucky, Tennessee, and Indiana, the vast majority of distilled spirits companies that exist in the United States did not exist a generation ago. Most people who work in craft spirits are starting from scratch, professionally speaking, each one making it up on the fly through a combination of

networking, informal mentorship, onthe-job training, and self-education. Autodidacts, eat your heart out. For people without the time, resources, or connections to make that approach work (a group that includes many people of color, women, and lower-income people), there are few other options. But over the last few years, new efforts have been made to bridge that gap, including equity-focused programs designed to diversify the talent pipeline in the industry and help aspiring and early-career distillers and brands overcome financial barriers, build their networks, and grow their skills and knowledge. With any luck, the next generation of the spirits industry won’t have to reinvent quite so many wheels. 61