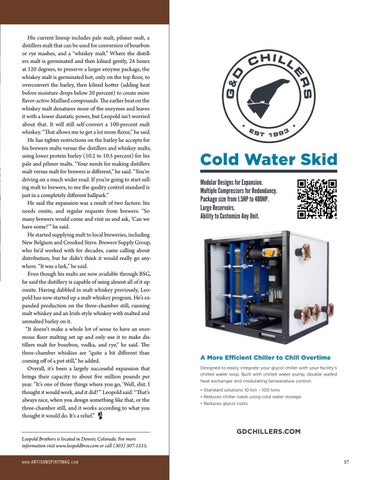 His current lineup includes pale malt, pilsner malt, a distillers malt that can be used for conversion of bourbon or rye mashes, and a “whiskey malt.” Where the distillers malt is germinated and then kilned gently, 24 hours at 120 degrees, to preserve a larger enzyme package, the whiskey malt is germinated hot, only on the top floor, to overconvert the barley, then kilned hotter (adding heat before moisture drops below 20 percent) to create more flavor-active Maillard compounds. The earlier heat on the whiskey malt denatures more of the enzymes and leaves it with a lower diastatic power, but Leopold isn’t worried about that. It will still self-convert a 100-percent malt whiskey. “That allows me to get a lot more flavor,” he said. He has tighter restrictions on the barley he accepts for his brewers malts versus the distillers and whiskey malts, using lower protein barley (10.2 to 10.5 percent) for his pale and pilsner malts. “Your needs for making distillers malt versus malt for brewers is different,” he said. “You’re driving on a much wider road. If you’re going to start selling malt to brewers, to me the quality control standard is just in a completely different ballpark.” He said the expansion was a result of two factors: his needs onsite, and regular requests from brewers. “So many brewers would come and visit us and ask, ‘Can we have some?’” he said. He started supplying malt to local breweries, including New Belgium and Crooked Stave. Brewers Supply Group, who he’d worked with for decades, came calling about distribution, but he didn’t think it would really go anywhere. “It was a lark,” he said. Even though his malts are now available through BSG, he said the distillery is capable of using almost all of it up onsite. Having dabbled in malt whiskey previously, Leopold has now started up a malt whiskey program. He’s expanded production on the three-chamber still, running malt whiskey and an Irish-style whiskey with malted and unmalted barley on it. “It doesn’t make a whole lot of sense to have an enormous floor malting set up and only use it to make distillers malt for bourbon, vodka, and rye,” he said. The three-chamber whiskies are “quite a bit different than coming off of a pot still,” he added. Overall, it’s been a largely successful expansion that brings their capacity to about five million pounds per year. “It’s one of those things where you go, ‘Well, shit. I thought it would work, and it did!’” Leopold said. “That’s always nice, when you design something like that, or the three-chamber still, and it works according to what you thought it would do. It’s a relief.”