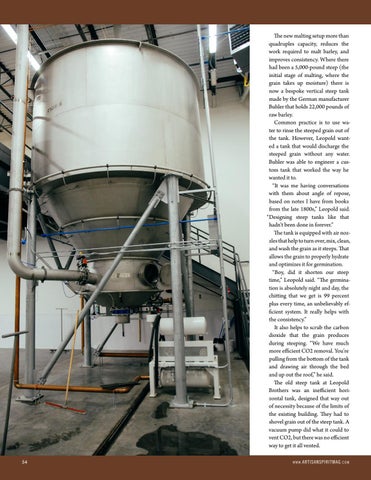 The new malting setup more than quadruples capacity, reduces the work required to malt barley, and improves consistency. Where there had been a 5,000-pound steep (the initial stage of malting, where the grain takes up moisture) there is now a bespoke vertical steep tank made by the German manufacturer Buhler that holds 22,000 pounds of raw barley. Common practice is to use water to rinse the steeped grain out of the tank. However, Leopold wanted a tank that would discharge the steeped grain without any water. Buhler was able to engineer a custom tank that worked the way he wanted it to. “It was me having conversations with them about angle of repose, based on notes I have from books from the late 1800s,” Leopold said. “Designing steep tanks like that hadn’t been done in forever.” The tank is equipped with air nozzles that help to turn over, mix, clean, and wash the grain as it steeps. That allows the grain to properly hydrate and optimizes it for germination. “Boy, did it shorten our steep time,” Leopold said. “The germination is absolutely night and day, the chitting that we get is 99 percent plus every time, an unbelievably efficient system. It really helps with the consistency.” It also helps to scrub the carbon dioxide that the grain produces during steeping. “We have much more efficient CO2 removal. You’re pulling from the bottom of the tank and drawing air through the bed and up out the roof,” he said. The old steep tank at Leopold Brothers was an inefficient horizontal tank, designed that way out of necessity because of the limits of the existing building. They had to shovel grain out of the steep tank. A vacuum pump did what it could to vent CO2, but there was no efficient way to get it all vented. 54