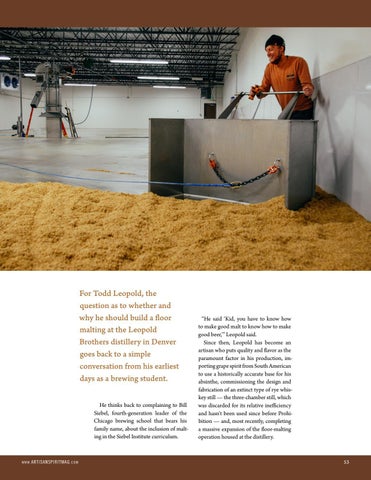 For Todd Leopold, the question as to whether and why he should build a floor malting at the Leopold Brothers distillery in Denver goes back to a simple conversation from his earliest days as a brewing student. He thinks back to complaining to Bill Siebel, fourth-generation leader of the Chicago brewing school that bears his family name, about the inclusion of malting in the Siebel Institute curriculum.

“He said ‘Kid, you have to know how to make good malt to know how to make good beer,’” Leopold said. Since then, Leopold has become an artisan who puts quality and flavor as the paramount factor in his production, importing grape spirit from South American to use a historically accurate base for his absinthe, commissioning the design and fabrication of an extinct type of rye whiskey still — the three-chamber still, which was discarded for its relative inefficiency and hasn’t been used since before Prohibition — and, most recently, completing a massive expansion of the floor-malting operation housed at the distillery.