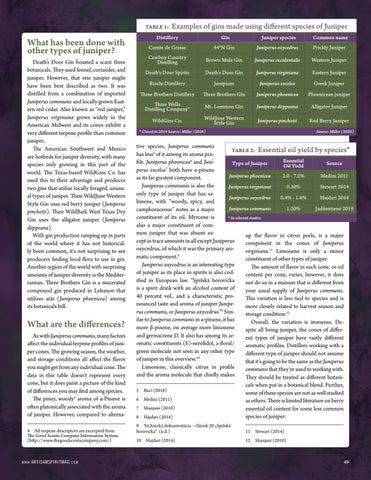 What has been done with other types of juniper? Death’s Door Gin boasted a scant three botanicals. They used fennel, coriander, and juniper. However, that one juniper might have been best described as two. It was distilled from a combination of imported Juniperus communis and locally grown Eastern red cedar. Also known as “red juniper,” Juniperus virginiana grows widely in the American Midwest and its cones exhibit a very different terpene profile than common juniper. The American Southwest and Mexico are hotbeds for juniper diversity, with many species only growing in this part of the world. The Texas-based WildGins Co. has used this to their advantage and produces two gins that utilize locally foraged, unusual types of juniper. Their WildJune Western Style Gin uses red berry juniper (Juniperus pinchotii). Their WildBark West Texas Dry Gin uses the alligator juniper (Juniperus deppeana). With gin production ramping up in parts of the world where it has not historically been common, it’s not surprising to see producers finding local flora to use in gin. Another region of the world with surprising amounts of juniper diversity is the Mediterranean. Three Brothers Gin is a macerated compound gin produced in Lebanon that utilizes arâr (Juniperus phoenicea) among its botanicals bill.

What are the differences? As with Juniperus communis, many factors affect the individual terpene profiles of juniper cones. The growing season, the weather, and storage conditions all affect the flavor you might get from any individual cone. The data in this table doesn’t represent every cone, but it does paint a picture of the kind of differences you may find among species. The piney, woody4 aroma of α-Pinene is often platonically associated with the aroma of juniper. However, compared to alterna4  All terpene descriptors are excerpted from The Good Scents Company Information System. (http://www.thegoodscentscompany.com/)

Examples of gins made using different species of Juniper

tive species, Juniperus communis TABLE 2: Essential oil yield by species* has less5 of it among its aroma proEssential file. Juniperus phoenicea6 and JuniType of Juniper Source Oil Yield perus excelsa7 both have α-pinene 2.0 - 7.0% Medini 2011 Juniperus phoenicea as its far greatest component. Juniperus communis is also the 0.30% Stewart 2014 Juniperus virginiana only type of juniper that has sa0.4% - 1.8% Hajdari 2014 Juniperus oxycedrus binene, with “woody, spicy, and 1.20% Judžentienė 2019 Juniperus communis camphoraceous” notes as a major constituent of its oil. Myrcene is * In selected studies also a major constituent of common juniper that was absent exup the flavor in citrus peels, is a major cept in trace amounts in all except Juniperus component in the cones of Juniperus oxycedrus, of which it was the primary arovirginiana.11 Limonene is only a minor matic component.8 constituent of other types of juniper. Juniperus oxycedrus is an interesting type The amount of flavor in each cone, or oil of juniper as its place in spirits is also codcontent per cone, varies, however, it does ified in European law. “Spišská borovička not do so in a manner that is different from is a spirit drink with an alcohol content of your usual supply of Juniperus communis. 40 percent vol., and a characteristic proThis variation is less tied to species and is nounced taste and aroma of juniper Junipemore closely related to harvest season and rus communis, or Juniperus oxycedrus.”9 Simstorage condition.12 ilar to Juniperus communis in α-pinene, it has Overall, the variation is immense. Demore β-pinene, on average more limonene spite all being juniper, the cones of differand germacrene D. It also has among its arent types of juniper have vastly different omatic constituents (E)-nerolidol, a floral/ aromatic profiles. Distillers working with a green molecule not seen in any other type different type of juniper should not assume of juniper in this overview.10 that it’s going to be the same as the Juniperus Limonene, classically citrus in profile communis that they’re used to working with. and the aroma molecule that chiefly makes They should be treated as different botani-

cals when put in a botanical blend. Further, some of these species are not as well studied as others. There is limited literature on berry essential oil content for some less common species of juniper.