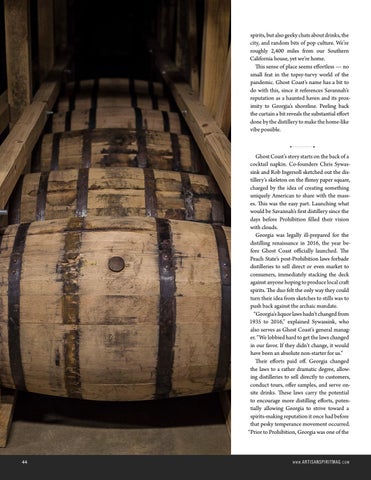 spirits, but also geeky chats about drinks, the city, and random bits of pop culture. We’re roughly 2,400 miles from our Southern California house, yet we’re home. This sense of place seems effortless — no small feat in the topsy-turvy world of the pandemic. Ghost Coast’s name has a bit to do with this, since it references Savannah’s reputation as a haunted haven and its proximity to Georgia’s shoreline. Peeling back the curtain a bit reveals the substantial effort done by the distillery to make the home-like vibe possible.

Ghost Coast’s story starts on the back of a cocktail napkin. Co-founders Chris Sywassink and Rob Ingersoll sketched out the distillery’s skeleton on the flimsy paper square, charged by the idea of creating something uniquely American to share with the masses. This was the easy part. Launching what would be Savannah’s first distillery since the days before Prohibition filled their vision with clouds. Georgia was legally ill-prepared for the distilling renaissance in 2016, the year before Ghost Coast officially launched. The Peach State’s post-Prohibition laws forbade distilleries to sell direct or even market to consumers, immediately stacking the deck against anyone hoping to produce local craft spirits. The duo felt the only way they could turn their idea from sketches to stills was to push back against the archaic mandate. “Georgia’s liquor laws hadn’t changed from 1935 to 2016,” explained Sywassink, who also serves as Ghost Coast’s general manager. “We lobbied hard to get the laws changed in our favor. If they didn’t change, it would have been an absolute non-starter for us.” Their efforts paid off. Georgia changed the laws to a rather dramatic degree, allowing distilleries to sell directly to customers, conduct tours, offer samples, and serve onsite drinks. These laws carry the potential to encourage more distilling efforts, potentially allowing Georgia to strive toward a spirits-making reputation it once had before that pesky temperance movement occurred. “Prior to Prohibition, Georgia was one of the