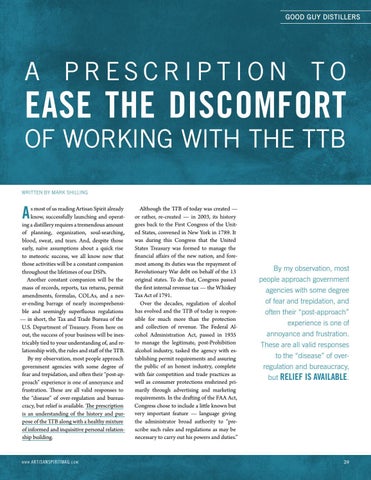 OF WORKING WITH THE TTB WRITTEN BY MARK SHILLING

s most of us reading Artisan Spirit already know, successfully launching and operating a distillery requires a tremendous amount of planning, organization, soul-searching, blood, sweat, and tears. And, despite those early, naïve assumptions about a quick rise to meteoric success, we all know now that those activities will be a constant companion throughout the lifetimes of our DSPs. Another constant companion will be the mass of records, reports, tax returns, permit amendments, formulas, COLAs, and a never-ending barrage of nearly incomprehensible and seemingly superfluous regulations — in short, the Tax and Trade Bureau of the U.S. Department of Treasury. From here on out, the success of your business will be inextricably tied to your understanding of, and relationship with, the rules and staff of the TTB. By my observation, most people approach government agencies with some degree of fear and trepidation, and often their “post-approach” experience is one of annoyance and frustration. These are all valid responses to the “disease” of over-regulation and bureaucracy, but relief is available. The prescription is an understanding of the history and purpose of the TTB along with a healthy mixture of informed and inquisitive personal relationship building.

Although the TTB of today was created — or rather, re-created — in 2003, its history goes back to the First Congress of the United States, convened in New York in 1789. It was during this Congress that the United States Treasury was formed to manage the financial affairs of the new nation, and foremost among its duties was the repayment of Revolutionary War debt on behalf of the 13 original states. To do that, Congress passed the first internal revenue tax — the Whiskey Tax Act of 1791. Over the decades, regulation of alcohol has evolved and the TTB of today is responsible for much more than the protection and collection of revenue. The Federal Alcohol Administration Act, passed in 1935 to manage the legitimate, post-Prohibition alcohol industry, tasked the agency with establishing permit requirements and assuring the public of an honest industry, complete with fair competition and trade practices as well as consumer protections enshrined primarily through advertising and marketing requirements. In the drafting of the FAA Act, Congress chose to include a little known but very important feature — language giving the administrator broad authority to “prescribe such rules and regulations as may be necessary to carry out his powers and duties.”

By my observation, most people approach government agencies with some degree of fear and trepidation, and often their “post-approach” experience is one of annoyance and frustration. These are all valid responses to the “disease” of overregulation and bureaucracy, but RELIEF IS AVAILABLE.