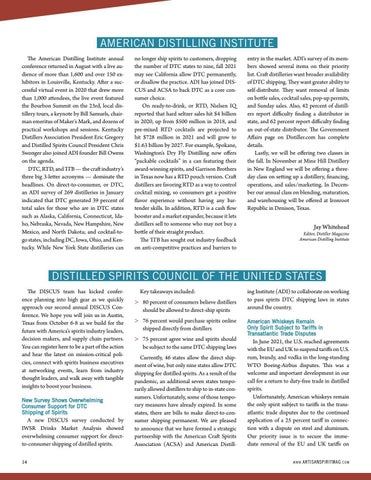 AMERICAN DISTILLING INSTITUTE The American Distilling Institute annual conference returned in August with a live audience of more than 1,600 and over 150 exhibitors in Louisville, Kentucky. After a successful virtual event in 2020 that drew more than 1,000 attendees, the live event featured the Bourbon Summit on the 23rd, local distillery tours, a keynote by Bill Samuels, chairman emeritus of Maker’s Mark, and dozens of practical workshops and sessions. Kentucky Distillers Association President Eric Gregory and Distilled Spirits Council President Chris Swonger also joined ADI founder Bill Owens on the agenda. DTC, RTD, and TTB — the craft industry’s three big 3-letter acronyms — dominate the headlines. On direct-to-consumer, or DTC, an ADI survey of 269 distilleries in January indicated that DTC generated 39 percent of total sales for those who are in DTC states such as Alaska, California, Connecticut, Idaho, Nebraska, Nevada, New Hampshire, New Mexico, and North Dakota; and cocktail-togo states, including DC, Iowa, Ohio, and Kentucky. While New York State distilleries can

no longer ship spirits to customers, dropping the number of DTC states to nine, fall 2021 may see California allow DTC permanently, or disallow the practice. ADI has joined DISCUS and ACSA to back DTC as a core consumer choice. On ready-to-drink, or RTD, Nielsen IQ reported that hard seltzer sales hit $4 billion in 2020, up from $500 million in 2018, and pre-mixed RTD cocktails are projected to hit $728 million in 2021 and will grow to $1.63 billion by 2027. For example, Spokane, Washington’s Dry Fly Distilling now offers “packable cocktails” in a can featuring their award-winning spirits, and Garrison Brothers in Texas now has a RTD pouch version. Craft distillers are favoring RTD as a way to control cocktail mixing, so consumers get a positive flavor experience without having any bartender skills. In addition, RTD is a cash flow booster and a market expander, because it lets distillers sell to someone who may not buy a bottle of their straight product. The TTB has sought out industry feedback on anti-competitive practices and barriers to

entry in the market. ADI’s survey of its members showed several items on their priority list. Craft distilleries want broader availability of DTC shipping. They want greater ability to self-distribute. They want removal of limits on bottle sales, cocktail sales, pop-up permits, and Sunday sales. Also, 42 percent of distillers report difficulty finding a distributor in state, and 62 percent report difficulty finding an out-of-state distributor. The Government Affairs page on Distiller.com has complete details. Lastly, we will be offering two classes in the fall. In November at Mine Hill Distillery in New England we will be offering a threeday class on setting up a distillery, financing, operations, and sales/marketing. In December our annual class on blending, maturation, and warehousing will be offered at Ironroot Republic in Denison, Texas. Jay Whitehead Editor, Distiller Magazine American Distilling Institute

DISTILLED SPIRITS COUNCIL OF THE UNITED STATES The DISCUS team has kicked conference planning into high gear as we quickly approach our second annual DISCUS Conference. We hope you will join us in Austin, Texas from October 6-8 as we build for the future with America’s spirits industry leaders, decision makers, and supply chain partners. You can register here to be a part of the action and hear the latest on mission-critical policies, connect with spirits business executives at networking events, learn from industry thought leaders, and walk away with tangible insights to boost your business. New Survey Shows Overwhelming Consumer Support for DTC Shipping of Spirits

&gt; 80 percent of consumers believe distillers should be allowed to direct-ship spirits

&gt; 75 percent agree wine and spirits should be subject to the same DTC shipping laws Currently, 46 states allow the direct shipment of wine, but only nine states allow DTC shipping for distilled spirits. As a result of the pandemic, an additional seven states temporarily allowed distillers to ship to in-state consumers. Unfortunately, some of those temporary measures have already expired. In some states, there are bills to make direct-to-consumer shipping permanent. We are pleased to announce that we have formed a strategic partnership with the American Craft Spirits Association (ACSA) and American Distill-

ing Institute (ADI) to collaborate on working to pass spirits DTC shipping laws in states around the country. American Whiskeys Remain Only Spirit Subject to Tariffs in Transatlantic Trade Disputes

In June 2021, the U.S. reached agreements with the EU and UK to suspend tariffs on U.S. rum, brandy, and vodka in the long-standing WTO Boeing-Airbus disputes. This was a welcome and important development in our call for a return to duty-free trade in distilled spirits. Unfortunately, American whiskeys remain the only spirit subject to tariffs in the transatlantic trade disputes due to the continued application of a 25 percent tariff in connection with a dispute on steel and aluminum. Our priority issue is to secure the immediate removal of the EU and UK tariffs on W W W . ARTISANSPIRITMAG . C O M