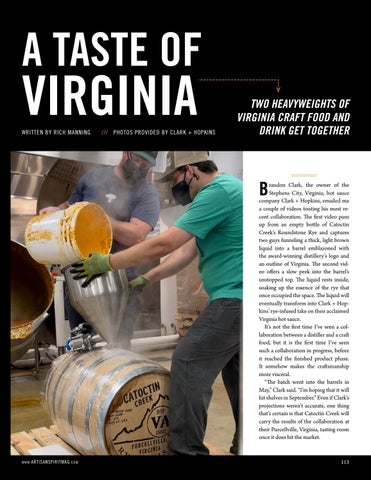 TWO HEAVYWEIGHTS OF VIRGINIA CRAFT FOOD AND DRINK GET TOGETHER

randon Clark, the owner of the Stephens City, Virginia, hot sauce company Clark + Hopkins, emailed me a couple of videos touting his most recent collaboration. The first video pans up from an empty bottle of Catoctin Creek’s Roundstone Rye and captures two guys funneling a thick, light brown liquid into a barrel emblazoned with the award-winning distillery’s logo and an outline of Virginia. The second video offers a slow peek into the barrel’s unstopped top. The liquid rests inside, soaking up the essence of the rye that once occupied the space. The liquid will eventually transform into Clark + Hopkins’ rye-infused take on their acclaimed Virginia hot sauce. It’s not the first time I’ve seen a collaboration between a distiller and a craft food, but it is the first time I’ve seen such a collaboration in progress, before it reached the finished product phase. It somehow makes the craftsmanship more visceral. “The batch went into the barrels in May,” Clark said. “I’m hoping that it will hit shelves in September.” Even if Clark’s projections weren’t accurate, one thing that’s certain is that Catoctin Creek will carry the results of the collaboration at their Purcellville, Virginia, tasting room once it does hit the market.