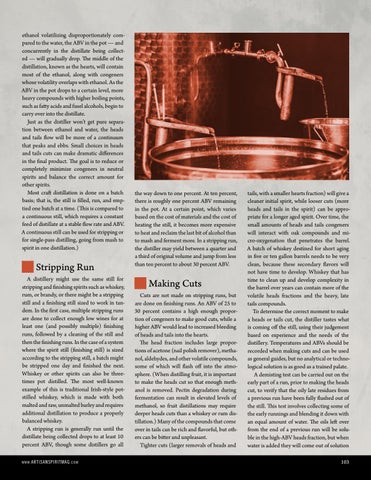 ethanol volatilizing disproportionately compared to the water, the ABV in the pot — and concurrently in the distillate being collected — will gradually drop. The middle of the distillation, known as the hearts, will contain most of the ethanol, along with congeners whose volatility overlaps with ethanol. As the ABV in the pot drops to a certain level, more heavy compounds with higher boiling points, such as fatty acids and fusel alcohols, begin to carry over into the distillate. Just as the distiller won’t get pure separation between ethanol and water, the heads and tails flow will be more of a continuum that peaks and ebbs. Small choices in heads and tails cuts can make dramatic differences in the final product. The goal is to reduce or completely minimize congeners in neutral spirits and balance the correct amount for other spirits. Most craft distillation is done on a batch basis; that is, the still is filled, run, and emptied one batch at a time. (This is compared to a continuous still, which requires a constant feed of distillate at a stable flow rate and ABV. A continuous still can be used for stripping or for single-pass distilling, going from mash to spirit in one distillation.)

Stripping Run A distillery might use the same still for stripping and finishing spirits such as whiskey, rum, or brandy, or there might be a stripping still and a finishing still sized to work in tandem. In the first case, multiple stripping runs are done to collect enough low wines for at least one (and possibly multiple) finishing runs, followed by a cleaning of the still and then the finishing runs. In the case of a system where the spirit still (finishing still) is sized according to the stripping still, a batch might be stripped one day and finished the next. Whiskey or other spirits can also be threetimes pot distilled. The most well-known example of this is traditional Irish-style potstilled whiskey, which is made with both malted and raw, unmalted barley and requires additional distillation to produce a properly balanced whiskey. A stripping run is generally run until the distillate being collected drops to at least 10 percent ABV, though some distillers go all W W W . ARTISANSPIRITMAG . C O M

the way down to one percent. At ten percent, there is roughly one percent ABV remaining in the pot. At a certain point, which varies based on the cost of materials and the cost of heating the still, it becomes more expensive to heat and reclaim the last bit of alcohol than to mash and ferment more. In a stripping run, the distiller may yield between a quarter and a third of original volume and jump from less than ten percent to about 30 percent ABV.

Making Cuts Cuts are not made on stripping runs, but are done on finishing runs. An ABV of 25 to 30 percent contains a high enough proportion of congeners to make good cuts, while a higher ABV would lead to increased bleeding of heads and tails into the hearts. The head fraction includes large proportions of acetone (nail polish remover), methanol, aldehydes, and other volatile compounds, some of which will flash off into the atmosphere. (When distilling fruit, it is important to make the heads cut so that enough methanol is removed. Pectin degradation during fermentation can result in elevated levels of methanol, so fruit distillations may require deeper heads cuts than a whiskey or rum distillation.) Many of the compounds that come over in tails can be rich and flavorful, but others can be bitter and unpleasant. Tighter cuts (larger removals of heads and

tails, with a smaller hearts fraction) will give a cleaner initial spirit, while looser cuts (more heads and tails in the spirit) can be appropriate for a longer aged spirit. Over time, the small amounts of heads and tails congeners will interact with oak compounds and micro-oxygenation that penetrates the barrel. A batch of whiskey destined for short aging in five or ten gallon barrels needs to be very clean, because these secondary flavors will not have time to develop. Whiskey that has time to clean up and develop complexity in the barrel over years can contain more of the volatile heads fractions and the heavy, late tails compounds. To determine the correct moment to make a heads or tails cut, the distiller tastes what is coming off the still, using their judgement based on experience and the needs of the distillery. Temperatures and ABVs should be recorded when making cuts and can be used as general guides, but no analytical or technological solution is as good as a trained palate. A demisting test can be carried out on the early part of a run, prior to making the heads cut, to verify that the oily late residues from a previous run have been fully flushed out of the still. This test involves collecting some of the early runnings and blending it down with an equal amount of water. The oils left over from the end of a previous run will be soluble in the high-ABV heads fraction, but when water is added they will come out of solution 103