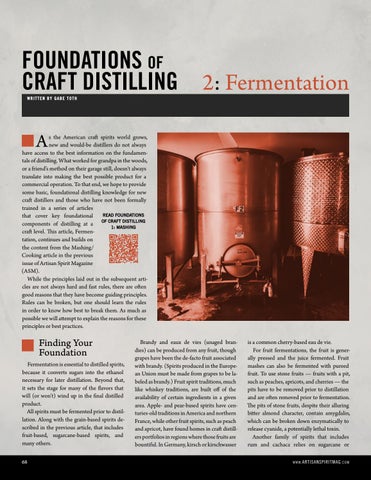 s the American craft spirits world grows, new and would-be distillers do not always have access to the best information on the fundamentals of distilling. What worked for grandpa in the woods, or a friend’s method on their garage still, doesn't always translate into making the best possible product for a commercial operation. To that end, we hope to provide some basic, foundational distilling knowledge for new craft distillers and those who have not been formally trained in a series of articles READ FOUNDATIONS that cover key foundational OF CRAFT DISTILLING components of distilling at a 1: MASHING craft level. This article, Fermentation, continues and builds on the content from the Mashing/ Cooking article in the previous issue of Artisan Spirit Magazine (ASM). While the principles laid out in the subsequent articles are not always hard and fast rules, there are often good reasons that they have become guiding principles. Rules can be broken, but one should learn the rules in order to know how best to break them. As much as possible we will attempt to explain the reasons for these principles or best practices.

Finding Your Foundation Fermentation is essential to distilled spirits, because it converts sugars into the ethanol necessary for later distillation. Beyond that, it sets the stage for many of the flavors that will (or won’t) wind up in the final distilled product. All spirits must be fermented prior to distillation. Along with the grain-based spirits described in the previous article, that includes fruit-based, sugarcane-based spirits, and many others. 68

Brandy and eaux de vies (unaged brandies) can be produced from any fruit, though grapes have been the de-facto fruit associated with brandy. (Spirits produced in the European Union must be made from grapes to be labeled as brandy.) Fruit spirit traditions, much like whiskey traditions, are built off of the availability of certain ingredients in a given area. Apple- and pear-based spirits have centuries-old traditions in America and northern France, while other fruit spirits, such as peach and apricot, have found homes in craft distillers portfolios in regions where those fruits are bountiful. In Germany, kirsch or kirschwasser

is a common cherry-based eau de vie. For fruit fermentations, the fruit is generally pressed and the juice fermented. Fruit mashes can also be fermented with pureed fruit. To use stone fruits — fruits with a pit, such as peaches, apricots, and cherries — the pits have to be removed prior to distillation and are often removed prior to fermentation. The pits of stone fruits, despite their alluring bitter almond character, contain amygdalin, which can be broken down enzymatically to release cyanide, a potentially lethal toxin. Another family of spirits that includes rum and cachaca relies on sugarcane or W W W . ARTISANSPIRITMAG . C O M