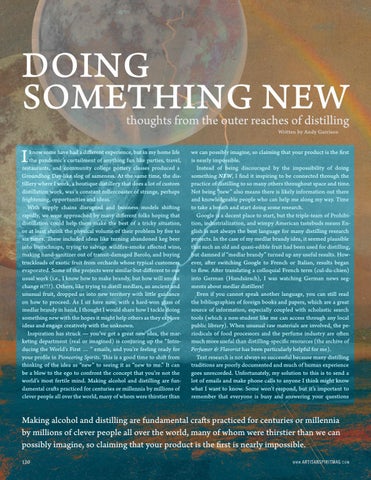 thoughts from the outer reaches of distilling Written by Andy Garrison

know some have had a different experience, but in my home life the pandemic’s curtailment of anything fun like parties, travel, restaurants, and community college pottery classes produced a Groundhog Day-like slog of sameness. At the same time, the distillery where I work, a boutique distillery that does a lot of custom distillation work, was a constant rollercoaster of strange, perhaps frightening, opportunities and ideas. With supply chains disrupted and business models shifting rapidly, we were approached by many different folks hoping that distillation could help them make the best of a tricky situation, or at least shrink the physical volume of their problem by five to six times. These included ideas like turning abandoned keg beer into bierschnaps, trying to salvage wildfire-smoke affected wine, making hand-sanitizer out of transit-damaged Barolo, and buying truckloads of exotic fruit from orchards whose typical customers evaporated. Some of the projects were similar-but-different to our usual work (i.e., I know how to make brandy, but how will smoke change it?!?). Others, like trying to distill medlars, an ancient and unusual fruit, dropped us into new territory with little guidance on how to proceed. As I sit here now, with a hard-won glass of medlar brandy in hand, I thought I would share how I tackle doing something new with the hopes it might help others as they explore ideas and engage creatively with the unknown. Inspiration has struck — you’ve got a great new idea, the marketing department (real or imagined) is conjuring up the “Introducing the World’s First … ” emails, and you’re feeling ready for your profile in Pioneering Spirits. This is a good time to shift from thinking of the idea as “new” to seeing it as “new to me.” It can be a blow to the ego to confront the concept that you’re not the world’s most fertile mind. Making alcohol and distilling are fundamental crafts practiced for centuries or millennia by millions of clever people all over the world, many of whom were thirstier than

we can possibly imagine, so claiming that your product is the first is nearly impossible. Instead of being discouraged by the impossibility of doing something NEW, I find it inspiring to be connected through the practice of distilling to so many others throughout space and time. Not being “new” also means there is likely information out there and knowledgeable people who can help me along my way. Time to take a breath and start doing some research. Google is a decent place to start, but the triple-team of Prohibition, industrialization, and wimpy American tastebuds means English is not always the best language for many distilling research projects. In the case of my medlar brandy idea, it seemed plausible that such an old and quasi-edible fruit had been used for distilling, but damned if “medlar brandy” turned up any useful results. However, after switching Google to French or Italian, results began to flow. After translating a colloquial French term (cul-du-chien) into German (Hundsärsch), I was watching German news segments about medlar distillers! Even if you cannot speak another language, you can still read the bibliographies of foreign books and papers, which are a great source of information, especially coupled with scholastic search tools (which a non-student like me can access through any local public library). When unusual raw materials are involved, the periodicals of food processors and the perfume industry are often much more useful than distilling-specific resources (the archive of Perfumer &amp; Flavorist has been particularly helpful for me). Text research is not always so successful because many distilling traditions are poorly documented and much of human experience goes unrecorded. Unfortunately, my solution to this is to send a lot of emails and make phone calls to anyone I think might know what I want to know. Some won’t respond, but it’s important to remember that everyone is busy and answering your questions

Making alcohol and distilling are fundamental crafts practiced for centuries or millennia by millions of clever people all over the world, many of whom were thirstier than we can possibly imagine, so claiming that your product is the first is nearly impossible. 120