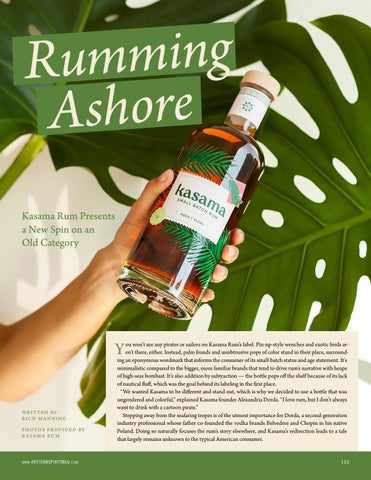 ou won’t see any pirates or sailors on Kasama Rum’s label. Pin-up-style wenches and exotic birds aren’t there, either. Instead, palm fronds and unobtrusive pops of color stand in their place, surrounding an eponymous wordmark that informs the consumer of its small-batch status and age statement. It’s minimalistic compared to the bigger, more familiar brands that tend to drive rum’s narrative with heaps of high-seas bombast. It’s also addition by subtraction — the bottle pops off the shelf because of its lack of nautical fluff, which was the goal behind its labeling in the first place. “We wanted Kasama to be different and stand out, which is why we decided to use a bottle that was ungendered and colorful,” explained Kasama founder Alexandria Dorda. “I love rum, but I don’t always want to drink with a cartoon pirate.” Stepping away from the seafaring tropes is of the utmost importance for Dorda, a second-generation industry professional whose father co-founded the vodka brands Belvedere and Chopin in his native Poland. Doing so naturally focuses the rum’s story elsewhere, and Kasama’s redirection leads to a tale that largely remains unknown to the typical American consumer.