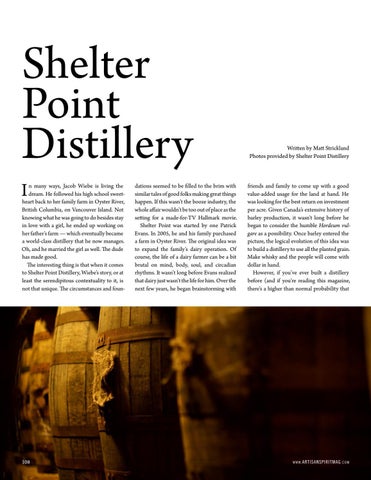 n many ways, Jacob Wiebe is living the dream. He followed his high school sweetheart back to her family farm in Oyster River, British Columbia, on Vancouver Island. Not knowing what he was going to do besides stay in love with a girl, he ended up working on her father’s farm — which eventually became a world-class distillery that he now manages. Oh, and he married the girl as well. The dude has made good. The interesting thing is that when it comes to Shelter Point Distillery, Wiebe’s story, or at least the serendipitous contextuality to it, is not that unique. The circumstances and foun-

dations seemed to be filled to the brim with similar tales of good folks making great things happen. If this wasn’t the booze industry, the whole affair wouldn’t be too out of place as the setting for a made-for-TV Hallmark movie. Shelter Point was started by one Patrick Evans. In 2005, he and his family purchased a farm in Oyster River. The original idea was to expand the family’s dairy operation. Of course, the life of a dairy farmer can be a bit brutal on mind, body, soul, and circadian rhythms. It wasn’t long before Evans realized that dairy just wasn’t the life for him. Over the next few years, he began brainstorming with

friends and family to come up with a good value-added usage for the land at hand. He was looking for the best return on investment per acre. Given Canada’s extensive history of barley production, it wasn’t long before he began to consider the humble Hordeum vulgare as a possibility. Once barley entered the picture, the logical evolution of this idea was to build a distillery to use all the planted grain. Make whisky and the people will come with dollar in hand. However, if you’ve ever built a distillery before (and if you’re reading this magazine, there’s a higher than normal probability that