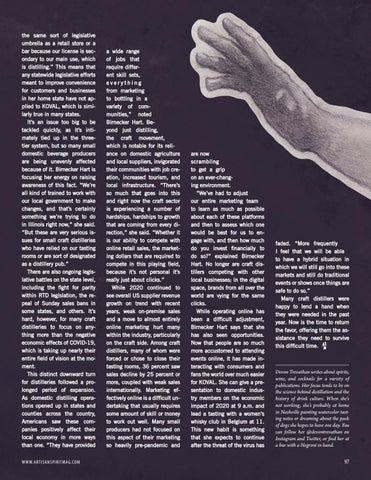 the same sort of legislative umbrella as a retail store or a bar because our license is secondary to our main use, which is distilling.” This means that any statewide legislative efforts meant to improve convenience for customers and businesses in her home state have not applied to KOVAL, which is similarly true in many states. It’s an issue too big to be tackled quickly, as it’s intimately tied up in the threetier system, but so many small domestic beverage producers are being unevenly affected because of it. Birnecker Hart is focusing her energy on raising awareness of this fact. “We’re all kind of trained to work with our local government to make changes, and that’s certainly something we’re trying to do in Illinois right now,” she said. “But these are very serious issues for small craft distilleries who have relied on our tasting rooms or are sort of designated as a distillery pub.” There are also ongoing legislative battles on the state level, including the fight for parity within RTD legislation, the repeal of Sunday sales bans in some states, and others. It’s hard, however, for many craft distilleries to focus on anything more than the negative economic effects of COVID-19, which is taking up nearly their entire field of vision at the moment. This distinct downward turn for distilleries followed a prolonged period of expansion. As domestic distilling operations opened up in states and counties across the country, Americans saw these companies positively affect their local economy in more ways than one. “They have provided WWW.ART ISANSP IRITMAG.COM

a wide range of jobs that require different skill sets, everything from marketing to bottling in a variety of communities,” noted Birnecker Hart. Beyond just distilling, the craft movement, which is notable for its reliance on domestic agriculture and local suppliers, invigorated their communities with job creation, increased tourism, and local infrastructure. “There’s so much that goes into this and right now the craft sector is experiencing a number of hardships, hardships to growth that are coming from every direction,” she said. “Whether it is our ability to compete with online retail sales, the marketing dollars that are required to compete in this playing field, because it’s not personal it’s really just about clicks.” While 2020 continued to see overall US supplier revenue growth on trend with recent years, weak on-premise sales and a move to almost entirely online marketing hurt many within the industry, particularly on the craft side. Among craft distillers, many of whom were forced or chose to close their tasting rooms, 36 percent saw sales decline by 25 percent or more, coupled with weak sales internationally. Marketing effectively online is a difficult undertaking that usually requires some amount of skill or money to work out well. Many small producers had not focused on this aspect of their marketing so heavily pre-pandemic and

are now  scrambling to get a grip on an ever-changing environment. “We’ve had to adjust our entire marketing team to learn as much as possible about each of these platforms and then to assess which one would be best for us to engage with, and then how much do you invest financially to do so?” explained Birnecker Hart. No longer are craft distillers competing with other local businesses; in the digital space, brands from all over the world are vying for the same clicks. While operating online has been a difficult adjustment, Birnecker Hart says that she has also seen opportunities. Now that people are so much more accustomed to attending events online, it has made interacting with consumers and fans the world over much easier for KOVAL. She can give a presentation to domestic industry members on the economic impact of 2020 at 9 a.m. and lead a tasting with a women’s whisky club in Belgium at 11. This new habit is something that she expects to continue after the threat of the virus has

faded. “More frequently I feel that we will be able to have a hybrid situation in which we will still go into these markets and still do traditional events or shows once things are safe to do so.” Many craft distillers were happy to lend a hand when they were needed in the past year. Now is the time to return the favor, offering them the assistance they need to survive this difficult time.

Devon Trevathan writes about spirits, wine, and cocktails for a variety of publications. Her focus tends to be on the science behind distillation and the history of drink culture. When she’s not working, she’s probably at home in Nashville painting watercolor tasting notes or dreaming about the pack of dogs she hopes to have one day. You can follow her @devontrevathan on Instagram and Twitter, or find her at a bar with a Negroni in hand.