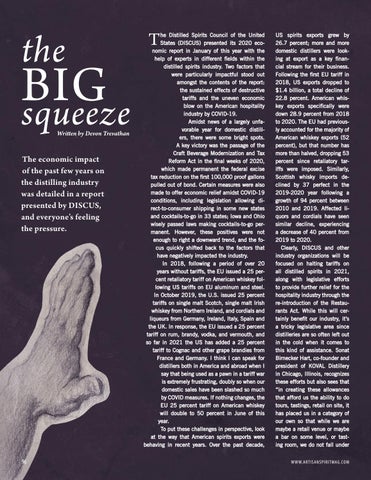 The economic impact of the past few years on the distilling industry was detailed in a report presented by DISCUS, and everyone’s feeling the pressure.

he Distilled Spirits Council of the United States (DISCUS) presented its 2020 economic report in January of this year with the help of experts in different fields within the distilled spirits industry. Two factors that were particularly impactful stood out amongst the contents of the report: the sustained effects of destructive tariffs and the uneven economic blow on the American hospitality industry by COVID-19. Amidst news of a largely unfavorable year for domestic distillers, there were some bright spots. A key victory was the passage of the Craft Beverage Modernization and Tax Reform Act in the final weeks of 2020, which made permanent the federal excise tax reduction on the first 100,000 proof gallons pulled out of bond. Certain measures were also made to offer economic relief amidst COVID-19 conditions, including legislation allowing direct-to-consumer shipping in some new states and cocktails-to-go in 33 states; Iowa and Ohio wisely passed laws making cocktails-to-go permanent. However, these positives were not enough to right a downward trend, and the focus quickly shifted back to the factors that have negatively impacted the industry. In 2018, following a period of over 20 years without tariffs, the EU issued a 25 percent retaliatory tariff on American whiskey following US tariffs on EU aluminum and steel. In October 2019, the U.S. issued 25 percent tariffs on single malt Scotch, single malt Irish whiskey from Northern Ireland, and cordials and liqueurs from Germany, Ireland, Italy, Spain and the UK. In response, the EU issued a 25 percent tariff on rum, brandy, vodka, and vermouth, and so far in 2021 the US has added a 25 percent tariff to Cognac and other grape brandies from France and Germany. I think I can speak for distillers both in America and abroad when I say that being used as a pawn in a tariff war is extremely frustrating, doubly so when our domestic sales have been slashed so much by COVID measures. If nothing changes, the EU 25 percent tariff on American whiskey will double to 50 percent in June of this year. To put these challenges in perspective, look at the way that American spirits exports were behaving in recent years. Over the past decade,

US spirits exports grew by 26.7 percent; more and more domestic distillers were looking at export as a key financial stream for their business. Following the first EU tariff in 2018, US exports dropped to $1.4 billion, a total decline of 22.8 percent. American whiskey exports specifically were down 28.9 percent from 2018 to 2020. The EU had previously accounted for the majority of American whiskey exports (52 percent), but that number has more than halved, dropping 53 percent since retaliatory tariffs were imposed. Similarly, Scottish whisky imports declined by 37 perfect in the 2019-2020 year following a growth of 94 percent between 2010 and 2019. Affected liquors and cordials have seen similar decline, experiencing a decrease of 40 percent from 2019 to 2020. Clearly, DISCUS and other industry organizations will be focused on halting tariffs on all distilled spirits in 2021, along with legislative efforts to provide further relief for the hospitality industry through the re-introduction of the Restaurants Act. While this will certainly benefit our industry, it’s a tricky legislative area since distilleries are so often left out in the cold when it comes to this kind of assistance. Sonat Birnecker Hart, co-founder and president of KOVAL Distillery in Chicago, Illinois, recognizes these efforts but also sees that “in creating these allowances that afford us the ability to do tours, tastings, retail on site, it has placed us in a category of our own so that while we are maybe a retail venue or maybe a bar on some level, or tasting room, we do not fall under WWW.ART ISANSPI RI TMAG.CO M