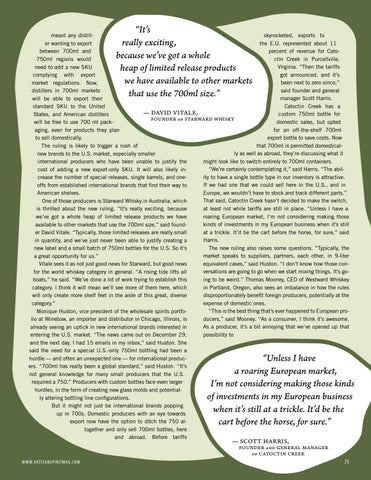 “It’s really exciting, because we’ve got a whole heap of limited release products we have available to other markets that use the 700ml size.”

skyrocketed, exports to meant any distillthe E.U. represented about 11 er wanting to export percent of revenue for Catobetween 700ml and ctin Creek in Purcellville, 750ml regions would Virginia. “Then the tariffs need to add a new SKU got announced, and it’s complying with export been next to zero since,” market regulations. Now, said founder and general distillers in 700ml markets manager Scott Harris. will be able to export their Catoctin Creek has a standard SKU to the United — DAVID VITALE, custom 750ml bottle for States, and American distillers FOUNDER of STARWARD WHISKY domestic sales, but opted will be free to use 700 ml packfor an off-the-shelf 700ml aging, even for products they plan export bottle to save costs. Now to sell domestically. that 700ml is permitted domesticalThe ruling is likely to trigger a rush of ly as well as abroad, they’re discussing what it new brands to the U.S. market, especially smaller might look like to switch entirely to 700ml containers. international producers who have been unable to justify the “We’re certainly contemplating it,” said Harris. “The abilcost of adding a new export-only SKU. It will also likely inity to have a single bottle type in our inventory is attractive. crease the number of special releases, single barrels, and oneIf we had one that we could sell here in the U.S., and in offs from established international brands that find their way to Europe, we wouldn’t have to stock and track different parts.” American shelves. That said, Catoctin Creek hasn’t decided to make the switch, One of those producers is Starward Whisky in Australia, which at least not while tariffs are still in place. “Unless I have a is thrilled about the new ruling. “It’s really exciting, because roaring European market, I’m not considering making those we’ve got a whole heap of limited release products we have kinds of investments in my European business when it’s still available to other markets that use the 700ml size,” said foundat a trickle. It’d be the cart before the horse, for sure,” said er David Vitale. “Typically, those limited releases are really small Harris. in quantity, and we’ve just never been able to justify creating a The new ruling also raises some questions. “Typically, the new label and a small batch of 750ml bottles for the U.S. So it’s market speaks to suppliers, partners, each other, in 9-liter a great opportunity for us.” equivalent cases,” said Huston. “I don’t know how those conVitale sees it as not just good news for Starward, but good news versations are going to go when we start mixing things. It’s gofor the world whiskey category in general. “A rising tide lifts all ing to be weird.” Thomas Mooney, CEO of Westward Whiskey boats,” he said. “We’ve done a lot of work trying to establish this in Portland, Oregon, also sees an imbalance in how the rules category. I think it will mean we’ll see more of them here, which disproportionately benefit foreign producers, potentially at the will only create more shelf feet in the aisle of this great, diverse expense of domestic ones. category.” “This is the best thing that’s ever happened to European proMonique Huston, vice president of the wholesale spirits portfoducers,” said Mooney. “As a consumer, I think it’s awesome. lio at Winebow, an importer and distributor in Chicago, Illinois, is As a producer, it’s a bit annoying that we’ve opened up that already seeing an uptick in new international brands interested in possibility to entering the U.S. market. “The news came out on December 29, and the next day, I had 15 emails in my inbox,” said Huston. She said the need for a special U.S.-only 750ml bottling had been a hurdle — and often an unexpected one — for international producers. “700ml has really been a global standard,” said Huston. “It’s not general knowledge for many small producers that the U.S. required a 750.” Producers with custom bottles face even larger hurdles, in the form of creating new glass molds and potentially altering bottling line configurations. But it might not just be international brands popping up in 700s. Domestic producers with an eye towards export now have the option to ditch the 750 altogether and only sell 700ml bottles, here and abroad. Before tariffs

“Unless I have a roaring European market, I’m not considering making those kinds of investments in my European business when it’s still at a trickle. It’d be the cart before the horse, for sure.” — SCOTT HARRIS,