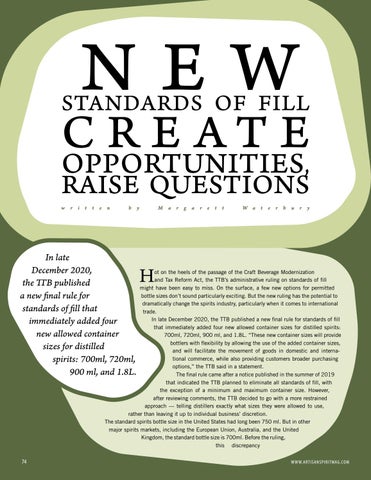 ot on the heels of the passage of the Craft Beverage Modernization and Tax Reform Act, the TTB’s administrative ruling on standards of fill might have been easy to miss. On the surface, a few new options for permitted bottle sizes don’t sound particularly exciting. But the new ruling has the potential to dramatically change the spirits industry, particularly when it comes to international trade. In late December 2020, the TTB published a new final rule for standards of fill that immediately added four new allowed container sizes for distilled spirits: 700ml, 720ml, 900 ml, and 1.8L. “These new container sizes will provide bottlers with flexibility by allowing the use of the added container sizes, and will facilitate the movement of goods in domestic and international commerce, while also providing customers broader purchasing options,” the TTB said in a statement. The final rule came after a notice published in the summer of 2019 that indicated the TTB planned to eliminate all standards of fill, with the exception of a minimum and maximum container size. However, after reviewing comments, the TTB decided to go with a more restrained approach — telling distillers exactly what sizes they were allowed to use, rather than leaving it up to individual business’ discretion. The standard spirits bottle size in the United States had long been 750 ml. But in other major spirits markets, including the European Union, Australia, and the United Kingdom, the standard bottle size is 700ml. Before the ruling, this discrepancy