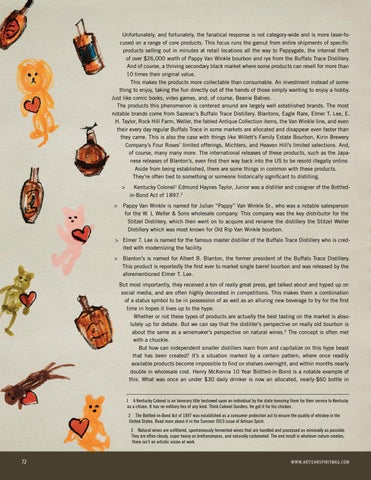 Unfortunately, and fortunately, the fanatical response is not category-wide and is more laser-focused on a range of core products. This focus runs the gamut from entire shipments of specific products selling out in minutes at retail locations all the way to Pappygate, the internal theft of over $26,000 worth of Pappy Van Winkle bourbon and rye from the Buffalo Trace Distillery. And of course, a thriving secondary black market where some products can resell for more than 10 times their original value. This makes the products more collectable than consumable. An investment instead of something to enjoy, taking the fun directly out of the hands of those simply wanting to enjoy a hobby. Just like comic books, video games, and, of course, Beanie Babies. The products this phenomenon is centered around are largely well established brands. The most notable brands come from Sazerac’s Buffalo Trace Distillery. Blantons, Eagle Rare, Elmer T. Lee, E. H. Taylor, Rock Hill Farm, Weller, the fabled Antique Collection items, the Van Winkle line, and even their every day regular Buffalo Trace in some markets are allocated and disappear even faster than they came. This is also the case with things like Willett’s Family Estate Bourbon, Kirin Brewery Company’s Four Roses’ limited offerings, Michters, and Heaven Hill’s limited selections. And, of course, many many more. The international releases of these products, such as the Japanese releases of Blanton’s, even find their way back into the US to be resold illegally online. Aside from being established, there are some things in common with these products. They’re often tied to something or someone historically significant to distilling. >

Kentucky Colonel1 Edmund Haynes Taylor, Junior was a distiller and cosigner of the Bottledin-Bond Act of 1897.2

> Pappy Van Winkle is named for Julian “Pappy” Van Winkle Sr., who was a notable salesperson for the W. L Weller & Sons wholesale company. This company was the key distributor for the Stitzel Distillery, which then went on to acquire and rename the distillery the Stitzel Weller Distillery which was most known for Old Rip Van Winkle bourbon. > Elmer T. Lee is named for the famous master distiller of the Buffalo Trace Distillery who is credited with modernizing the facility. > Blanton’s is named for Albert B. Blanton, the former president of the Buffalo Trace Distillery. This product is reportedly the first ever to market single barrel bourbon and was released by the aforementioned Elmer T. Lee. But most importantly, they received a ton of really great press, get talked about and hyped up on social media, and are often highly decorated in competitions. This makes them a combination of a status symbol to be in possession of as well as an alluring new beverage to try for the first time in hopes it lives up to the hype. Whether or not these types of products are actually the best tasting on the market is absolutely up for debate. But we can say that the distiller’s perspective on really old bourbon is about the same as a winemaker’s perspective on natural wines.3 The concept is often met with a chuckle. But how can independent smaller distillers learn from and capitalize on this hype beast that has been created? It’s a situation marked by a certain pattern, where once readily available products become impossible to find on shelves overnight, and within months nearly double in wholesale cost. Henry McKenna 10 Year Bottled-in-Bond is a notable example of this. What was once an under $30 daily drinker is now an allocated, nearly-$60 bottle in

1  A Kentucky Colonel is an honorary title bestowed upon an individual by the state honoring them for their service to Kentucky as a citizen. It has no military ties of any kind. Think Colonel Sanders. He got it for his chicken. 2  The Bottled-in-Bond Act of 1897 was established as a consumer protection act to ensure the quality of whiskey in the United States. Read more about it in the Summer 2019 issue of Artisan Spirit. 3  Natural wines are unfiltered, spontaneously fermented wines that are handled and processed as minimally as possible. They are often cloudy, super heavy on brettanomyces, and naturally carbonated. The end result is whatever nature creates; there isn’t an artistic vision at work.