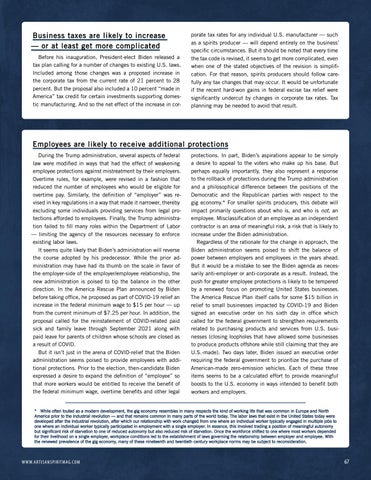 Business taxes are likely to increase — or at least get more complicated Before his inauguration, President-elect Biden released a tax plan calling for a number of changes to existing U.S. laws. Included among those changes was a proposed increase in the corporate tax from the current rate of 21 percent to 28 percent. But the proposal also included a 10 percent “made in America” tax credit for certain investments supporting domestic manufacturing. And so the net effect of the increase in cor-

porate tax rates for any individual U.S. manufacturer — such as a spirits producer — will depend entirely on the business’ specific circumstances. But it should be noted that every time the tax code is revised, it seems to get more complicated, even when one of the stated objectives of the revision is simplification. For that reason, spirits producers should follow carefully any tax changes that may occur. It would be unfortunate if the recent hard-won gains in federal excise tax relief were significantly undercut by changes in corporate tax rates. Tax planning may be needed to avoid that result.

Employees are likely to receive additional protections During the Trump administration, several aspects of federal law were modified in ways that had the effect of weakening employee protections against mistreatment by their employers. Overtime rules, for example, were revised in a fashion that reduced the number of employees who would be eligible for overtime pay. Similarly, the definition of “employer” was revised in key regulations in a way that made it narrower, thereby excluding some individuals providing services from legal protections afforded to employees. Finally, the Trump administration failed to fill many roles within the Department of Labor — limiting the agency of the resources necessary to enforce existing labor laws. It seems quite likely that Biden’s administration will reverse the course adopted by his predecessor. While the prior administration may have had its thumb on the scale in favor of the employer-side of the employer/employee relationship, the new administration is poised to tip the balance in the other direction. In the America Rescue Plan announced by Biden before taking office, he proposed as part of COVID-19 relief an increase in the federal minimum wage to $15 per hour — up from the current minimum of $7.25 per hour. In addition, the proposal called for the reinstatement of COVID-related paid sick and family leave through September 2021 along with paid leave for parents of children whose schools are closed as a result of COVID. But it isn’t just in the arena of COVID-relief that the Biden administration seems poised to provide employees with additional protections. Prior to the election, then-candidate Biden expressed a desire to expand the definition of “employee” so that more workers would be entitled to receive the benefit of the federal minimum wage, overtime benefits and other legal

protections. In part, Biden’s aspirations appear to be simply a desire to appeal to the voters who make up his base. But perhaps equally importantly, they also represent a response to the rollback of protections during the Trump administration and a philosophical difference between the positions of the Democratic and the Republican parties with respect to the gig economy.* For smaller spirits producers, this debate will impact primarily questions about who is, and who is not, an employee. Misclassification of an employee as an independent contractor is an area of meaningful risk, a risk that is likely to increase under the Biden administration. Regardless of the rationale for the change in approach, the Biden administration seems poised to shift the balance of power between employers and employees in the years ahead. But it would be a mistake to see the Biden agenda as necessarily anti-employer or anti-corporate as a result. Instead, the push for greater employee protections is likely to be tempered by a renewed focus on promoting United States businesses. The America Rescue Plan itself calls for some $15 billion in relief to small businesses impacted by COVID-19 and Biden signed an executive order on his sixth day in office which called for the federal government to strengthen requirements related to purchasing products and services from U.S. businesses (closing loopholes that have allowed some businesses to produce products offshore while still claiming that they are U.S.-made). Two days later, Biden issued an executive order requiring the federal government to prioritize the purchase of American-made zero-emission vehicles. Each of these three items seems to be a calculated effort to provide meaningful boosts to the U.S. economy in ways intended to benefit both workers and employers.

* While often touted as a modern development, the gig economy resembles in many respects the kind of working life that was common in Europe and North America prior to the industrial revolution — and that remains common in many parts of the world today. The labor laws that exist in the United States today were developed after the industrial revolution, after which our relationship with work changed from one where an individual worker typically engaged in multiple jobs to one where an individual worker typically participated in employment with a single employer. In essence, this involved trading a position of meaningful autonomy but significant risk of starvation to one of reduced autonomy but also reduced risk of starvation. Once the workforce shifted to one where most workers depended for their livelihood on a single employer, workplace conditions led to the establishment of laws governing the relationship between employer and employee. With the renewed prevalence of the gig economy, many of these nineteenth and twentieth century workplace norms may be subject to reconsideration.