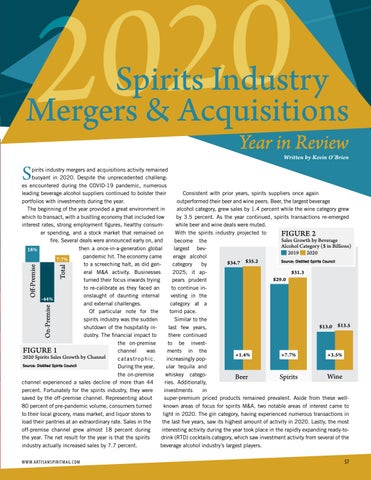 pirits industry mergers and acquisitions activity remained buoyant in 2020. Despite the unprecedented challenges encountered during the COVID-19 pandemic, numerous leading beverage alcohol suppliers continued to bolster their Consistent with prior years, spirits suppliers once again 7.7% portfolios with investments during the year. 7.9% outperformed their beer and wine peers. Beer, the largest beverage 7.3% 12.7% The beginning of the year provided a great environment in alcohol category, grew sales by 1.4 percent while the wine category grew $35.2 which to transact, with a bustling economy that included low by 3.5 percent. As the $34.7 year continued, spirits transactions re-emerged $31.3 interest rates, strong employment figures, healthy consumwhile beer and wine deals were muted. $29.0 er spending, and a stock market that remained on With the spirits industry projected to FIGURE 2 Sales Growth by Beverage fire. Several deals were announced early on, and become the Alcohol Category ($ in Billions) 7.9% then a once-in-a-generation global 7.7% largest bev18% 7.3% 2019 2020 pandemic hit. The economy came erage alcohol 7.7% Source: Distilled Spirits Council $34.7 $35.2 -0.3% to a screeching halt, as did gencategory by <$12

eral M&A activity. Businesses 2025, it ap$31.3 $13.0 $13.5 $29.0 turned their focus inwards trying pears prudent to re-calibrate as they faced an to continue inonslaught of daunting internal vesting in the 18% -44% and external challenges. category at a +1.4% +7.7% +3.5% 7.7% Of particular torrid pace. -0.3% note for the spirits industry was the sudden Similar to the $13.5 $13.0 Wine shutdown of the hospitality inlast few years, Beer Spirits dustry. The financial impact to there continued the on-premise to be invest-44% channel was ments in the FIGURE 1 +1.4% +7.7% +3.5% 2020 Spirits Sales Growth by Channel catastrophic. increasingly popSource: Distilled Spirits Council During the year, ular tequila and the on-premise whiskey categoWine Beer Spirits channel experienced a sales decline of more than 44 ries. Additionally, percent. Fortunately for the spirits industry, they were investments in saved by the off-premise channel. Vodka Representing about super-premium priced products remained prevalent. Aside from these well5.1% 80 percent of pre-pandemic volume, consumers turned known areas of focus for spirits M&A, two notable areas of interest came to to their local grocery, mass market, and liquor stores to light in 2020. The gin category, having experienced numerous transactions in Whiskey 5.5% load their pantries at an extraordinary rate. Sales in the the last five years, saw its highest amount of activity in 2020. Lastly, the most off-premise channel grew almost 18 percent during interesting activity during the year took place in the rapidly expanding ready-to5.9% Gin the year. The net result for the year is that the spirits drink (RTD) cocktails category, which saw investment activity from several of the industry actually increased sales by 7.7 percent. beverage alcohol industry’s largest players. Rum 5.9% Vodka 5.1% 5.5%