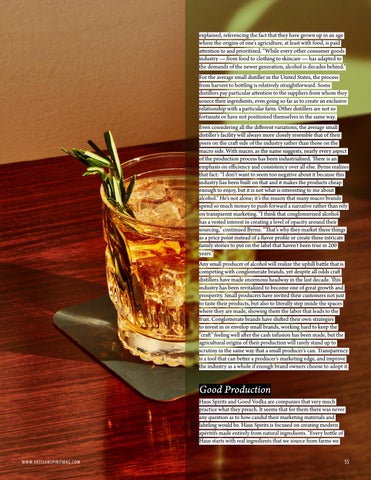 explained, referencing the fact that they have grown up in an age where the origins of one’s agriculture, at least with food, is paid attention to and prioritized. “While every other consumer goods industry — from food to clothing to skincare — has adapted to the demands of the newer generation, alcohol is decades behind.” For the average small distiller in the United States, the process from harvest to bottling is relatively straightforward. Some distillers pay particular attention to the suppliers from whom they source their ingredients, even going so far as to create an exclusive relationship with a particular farm. Other distillers are not so fortunate or have not positioned themselves in the same way. Even considering all the different variations, the average small distiller’s facility will always more closely resemble that of their peers on the craft side of the industry rather than those on the macro side. With macro, as the name suggests, nearly every aspect of the production process has been industrialized. There is an emphasis on efficiency and consistency over all else. Byrne realizes that fact: “I don’t want to seem too negative about it because this industry has been built on that and it makes the products cheap enough to enjoy, but it is not what is interesting to me about alcohol.” He’s not alone; it’s the reason that many macro brands spend so much money to push forward a narrative rather than rely on transparent marketing. “I think that conglomerized alcohol has a vested interest in creating a level of opacity around their sourcing,” continued Byrne. “That’s why they market these things as a price point instead of a flavor profile or create these intricate family stories to put on the label that haven’t been true in 200 years.” Any small producer of alcohol will realize the uphill battle that is competing with conglomerate brands, yet despite all odds craft distillers have made enormous headway in the last decade. This industry has been revitalized to become one of great growth and prosperity. Small producers have invited their customers not just to taste their products, but also to literally step inside the spaces where they are made, showing them the labor that leads to the fruit. Conglomerate brands have shifted their own strategies to invest in or envelop small brands, working hard to keep the “craft” feeling well after the cash infusion has been made, but the agricultural origins of their production will rarely stand up to scrutiny in the same way that a small producer’s can. Transparency is a tool that can better a producer’s marketing edge, and improve the industry as a whole if enough brand owners choose to adopt it.

Good Production Haus Spirits and Good Vodka are companies that very much practice what they preach. It seems that for them there was never any question as to how candid their marketing materials and labeling would be. Haus Spirits is focused on creating modern apéritifs made entirely from natural ingredients. “Every bottle of Haus starts with real ingredients that we source from farms we WWW.ART ISANSP IRITMAG.COM