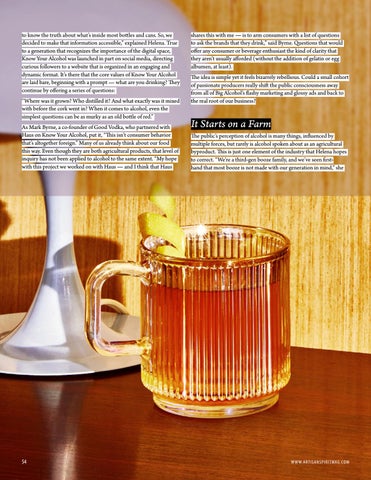 to know the truth about what’s inside most bottles and cans. So, we decided to make that information accessible,” explained Helena. True to a generation that recognizes the importance of the digital space, Know Your Alcohol was launched in part on social media, directing curious followers to a website that is organized in an engaging and dynamic format. It’s there that the core values of Know Your Alcohol are laid bare, beginning with a prompt — what are you drinking? They continue by offering a series of questions: “Where was it grown? Who distilled it? And what exactly was it mixed with before the cork went in? When it comes to alcohol, even the simplest questions can be as murky as an old bottle of red.” As Mark Byrne, a co-founder of Good Vodka, who partnered with Haus on Know Your Alcohol, put it, “This isn’t consumer behavior that’s altogether foreign.” Many of us already think about our food this way. Even though they are both agricultural products, that level of inquiry has not been applied to alcohol to the same extent. “My hope with this project we worked on with Haus — and I think that Haus

shares this with me — is to arm consumers with a list of questions to ask the brands that they drink,” said Byrne. Questions that would offer any consumer or beverage enthusiast the kind of clarity that they aren’t usually afforded (without the addition of gelatin or egg albumen, at least). The idea is simple yet it feels bizarrely rebellious. Could a small cohort of passionate producers really shift the public consciousness away from all of Big Alcohol’s flashy marketing and glossy ads and back to the real root of our business?

It Starts on a Farm The public’s perception of alcohol is many things, influenced by multiple forces, but rarely is alcohol spoken about as an agricultural byproduct. This is just one element of the industry that Helena hopes to correct. “We’re a third-gen booze family, and we’ve seen firsthand that most booze is not made with our generation in mind,” she