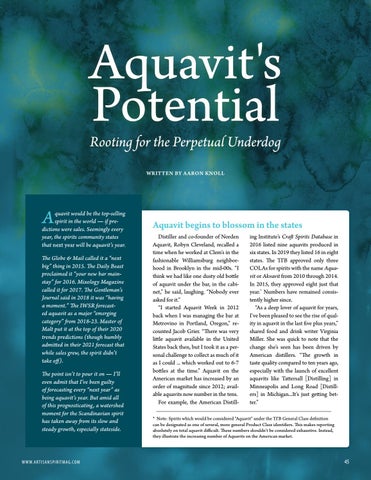 quavit would be the top-selling spirit in the world — if predictions were sales. Seemingly every year, the spirits community states that next year will be aquavit’s year. The Globe &amp; Mail called it a “next big” thing in 2015. The Daily Beast proclaimed it “your new bar mainstay” for 2016. Mixology Magazine called it for 2017. The Gentleman’s Journal said in 2018 it was “having a moment.” The IWSR forecasted aquavit as a major “emerging category” from 2018-23. Master of Malt put it at the top of their 2020 trends predictions (though humbly admitted in their 2021 forecast that while sales grew, the spirit didn’t take off). The point isn’t to pour it on — I’ll even admit that I’ve been guilty of forecasting every “next year” as being aquavit’s year. But amid all of this prognosticating, a watershed moment for the Scandinavian spirit has taken away from its slow and steady growth, especially stateside.

Aquavit begins to blossom in the states Distiller and co-founder of Norden Aquavit, Robyn Cleveland, recalled a time when he worked at Clem’s in the fashionable Williamsburg neighborhood in Brooklyn in the mid-00s. “I think we had like one dusty old bottle of aquavit under the bar, in the cabinet,” he said, laughing. “Nobody ever asked for it.” “I started Aquavit Week in 2012 back when I was managing the bar at Metrovino in Portland, Oregon,” recounted Jacob Grier. “There was very little aquavit available in the United States back then, but I took it as a personal challenge to collect as much of it as I could ... which worked out to 6-7 bottles at the time.” Aquavit on the American market has increased by an order of magnitude since 2012; available aquavits now number in the tens. For example, the American Distill-

ing Institute’s Craft Spirits Database in 2016 listed nine aquavits produced in six states. In 2019 they listed 16 in eight states. The TTB approved only three COLAs for spirits with the name Aquavit or Akvavit from 2010 through 2014. In 2015, they approved eight just that year.* Numbers have remained consistently higher since. “As a deep lover of aquavit for years, I&#39;ve been pleased to see the rise of quality in aquavit in the last five plus years,” shared food and drink writer Virginia Miller. She was quick to note that the change she’s seen has been driven by American distillers. “The growth in taste quality compared to ten years ago, especially with the launch of excellent aquavits like Tattersall [Distilling] in Minneapolis and Long Road [Distillers] in Michigan...It’s just getting better.”

* Note: Spirits which would be considered &quot;Aquavit&quot; under the TTB General Class definition can be designated as one of several, more general Product Class identifiers. This makes reporting absolutely on total aquavit difficult. These numbers shouldn’t be considered exhaustive. Instead, they illustrate the increasing number of Aquavits on the American market.