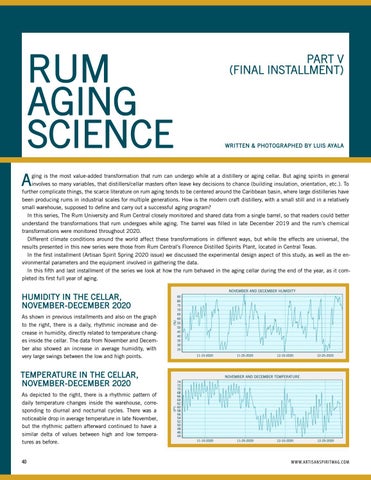 ging is the most value-added transformation that rum can undergo while at a distillery or aging cellar. But aging spirits in general involves so many variables, that distillers/cellar masters often leave key decisions to chance (building insulation, orientation, etc.). To further complicate things, the scarce literature on rum aging tends to be centered around the Caribbean basin, where large distilleries have been producing rums in industrial scales for multiple generations. How is the modern craft distillery, with a small still and in a relatively small warehouse, supposed to define and carry out a successful aging program? In this series, The Rum University and Rum Central closely monitored and shared data from a single barrel, so that readers could better understand the transformations that rum undergoes while aging. The barrel was filled in late December 2019 and the rum’s chemical transformations were monitored throughout 2020. Different climate conditions around the world affect these transformations in different ways, but while the effects are universal, the results presented in this new series were those from Rum Central’s Florence Distilled Spirits Plant, located in Central Texas. In the first installment (Artisan Spirit Spring 2020 issue) we discussed the experimental design aspect of this study, as well as the environmental parameters and the equipment involved in gathering the data. In this fifth and last installment of the series we look at how the rum behaved in the aging cellar during the end of the year, as it completed its first full year of aging.

HUMIDITY IN THE CELLAR, NOVEMBER-DECEMBER 2020 As shown in previous installments and also on the graph to the right, there is a daily, rhythmic increase and decrease in humidity, directly related to temperature changes inside the cellar. The data from November and December also showed an increase in average humidity, with very large swings between the low and high points.

TEMPERATURE IN THE CELLAR, NOVEMBER-DECEMBER 2020 As depicted to the right, there is a rhythmic pattern of daily temperature changes inside the warehouse, corresponding to diurnal and nocturnal cycles. There was a noticeable drop in average temperature in late November, but the rhythmic pattern afterward continued to have a similar delta of values between high and low temperatures as before.