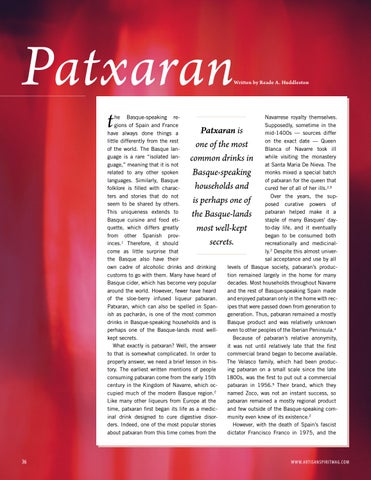 Written by Reade A. Huddleston

he Basque-speaking regions of Spain and France have always done things a little differently from the rest of the world. The Basque language is a rare “isolated language,” meaning that it is not related to any other spoken languages. Similarly, Basque folklore is filled with characters and stories that do not seem to be shared by others. This uniqueness extends to Basque cuisine and food etiquette, which differs greatly from other Spanish provinces.1 Therefore, it should come as little surprise that the Basque also have their own cadre of alcoholic drinks and drinking customs to go with them. Many have heard of Basque cider, which has become very popular around the world. However, fewer have heard of the sloe-berry infused liqueur patxaran. Patxaran, which can also be spelled in Spanish as pacharán, is one of the most common drinks in Basque-speaking households and is perhaps one of the Basque-lands most wellkept secrets. What exactly is patxaran? Well, the answer to that is somewhat complicated. In order to properly answer, we need a brief lesson in history. The earliest written mentions of people consuming patxaran come from the early 15th century in the Kingdom of Navarre, which occupied much of the modern Basque region.2 Like many other liqueurs from Europe at the time, patxaran first began its life as a medicinal drink designed to cure digestive disorders. Indeed, one of the most popular stories about patxaran from this time comes from the

Navarrese royalty themselves. Supposedly, sometime in the mid-1400s — sources differ on the exact date — Queen Blanca of Navarre took ill while visiting the monastery at Santa Maria De Nieva. The monks mixed a special batch of patxaran for the queen that cured her of all of her ills.2,3 Over the years, the supposed curative powers of patxaran helped make it a staple of many Basques' dayto-day life, and it eventually began to be consumed both recreationally and medicinally.2 Despite this almost universal acceptance and use by all levels of Basque society, patxaran’s production remained largely in the home for many decades. Most households throughout Navarre and the rest of Basque-speaking Spain made and enjoyed patxaran only in the home with recipes that were passed down from generation to generation. Thus, patxaran remained a mostly Basque product and was relatively unknown even to other peoples of the Iberian Peninsula.4 Because of patxaran’s relative anonymity, it was not until relatively late that the first commercial brand began to become available. The Velasco family, which had been producing patxaran on a small scale since the late 1800s, was the first to put out a commercial patxaran in 1956.5 Their brand, which they named Zoco, was not an instant success, so patxaran remained a mostly regional product and few outside of the Basque-speaking community even knew of its existence.2 However, with the death of Spain’s fascist dictator Francisco Franco in 1975, and the

Patxaran is one of the most common drinks in Basque-speaking households and is perhaps one of the Basque-lands most well-kept secrets.