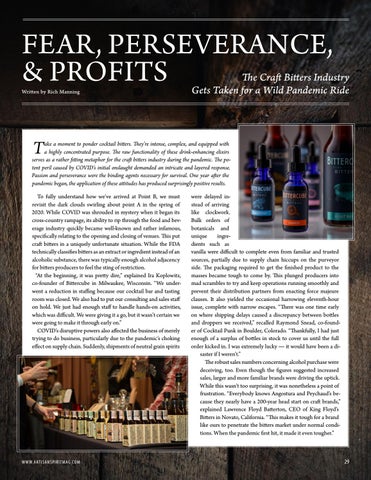 The Craft Bitters Industry Gets Taken for a Wild Pandemic Ride

ake a moment to ponder cocktail bitters. They’re intense, complex, and equipped with a highly concentrated purpose. The raw functionality of these drink-enhancing elixirs serves as a rather fitting metaphor for the craft bitters industry during the pandemic. The potent peril caused by COVID’s initial onslaught demanded an intricate and layered response. Passion and perseverance were the binding agents necessary for survival. One year after the pandemic began, the application of these attitudes has produced surprisingly positive results. To fully understand how we’ve arrived at Point B, we must revisit the dark clouds swirling about point A in the spring of 2020. While COVID was shrouded in mystery when it began its cross-country rampage, its ability to rip through the food and beverage industry quickly became well-known and rather infamous, specifically relating to the opening and closing of venues. This put craft bitters in a uniquely unfortunate situation. While the FDA technically classifies bitters as an extract or ingredient instead of an alcoholic substance, there was typically enough alcohol adjacency for bitters producers to feel the sting of restriction. “At the beginning, it was pretty dire,” explained Ira Koplowitz, co-founder of Bittercube in Milwaukee, Wisconsin. “We underwent a reduction in staffing because our cocktail bar and tasting room was closed. We also had to put our consulting and sales staff on hold. We just had enough staff to handle hands-on activities, which was difficult. We were giving it a go, but it wasn’t certain we were going to make it through early on.” COVID’s disruptive powers also affected the business of merely trying to do business, particularly due to the pandemic’s choking effect on supply chain. Suddenly, shipments of neutral grain spirits

were delayed instead of arriving like clockwork. Bulk orders of botanicals and unique ingredients such as vanilla were difficult to complete even from familiar and trusted sources, partially due to supply chain hiccups on the purveyor side. The packaging required to get the finished product to the masses became tough to come by. This plunged producers into mad scrambles to try and keep operations running smoothly and prevent their distribution partners from enacting force majeure clauses. It also yielded the occasional harrowing eleventh-hour issue, complete with narrow escapes. “There was one time early on where shipping delays caused a discrepancy between bottles and droppers we received,” recalled Raymond Snead, co-founder of Cocktail Punk in Boulder, Colorado. “Thankfully, I had just enough of a surplus of bottles in stock to cover us until the full order kicked in. I was extremely lucky — it would have been a disaster if I weren’t.” The robust sales numbers concerning alcohol purchase were deceiving, too. Even though the figures suggested increased sales, larger and more familiar brands were driving the uptick. While this wasn’t too surprising, it was nonetheless a point of frustration. “Everybody knows Angostura and Peychaud’s because they nearly have a 200-year head start on craft brands,” explained Lawrence Floyd Batterton, CEO of King Floyd’s Bitters in Novato, California. “This makes it tough for a brand like ours to penetrate the bitters market under normal conditions. When the pandemic first hit, it made it even tougher.”