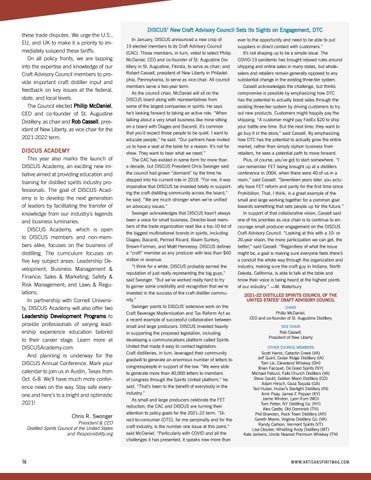 these trade disputes. We urge the U.S., EU, and UK to make it a priority to immediately suspend these tariffs. On all policy fronts, we are tapping into the expertise and knowledge of our Craft Advisory Council members to provide important craft distiller input and feedback on key issues at the federal, state, and local levels. The Council elected Philip McDaniel, CEO and co-founder of St. Augustine Distillery, as chair and Rob Cassell, president of New Liberty, as vice chair for the 2021-2022 term. DISCUS ACADEMY This year also marks the launch of DISCUS Academy, an exciting new initiative aimed at providing education and training for distilled spirits industry professionals. The goal of DISCUS Academy is to develop the next generation of leaders by facilitating the transfer of knowledge from our industry’s legends and business luminaries. DISCUS Academy, which is open to DISCUS members and non-members alike, focuses on the business of distilling. The curriculum focuses on five key subject areas: Leadership Development; Business Management & Finance; Sales & Marketing; Safety & Risk Management; and Laws & Regulations. In partnership with Cornell University, DISCUS Academy will also offer two Leadership Development Programs to provide professionals of varying leadership experience education tailored to their career stage. Learn more at DISCUSAcademy.com. And planning is underway for the DISCUS Annual Conference. Mark your calendar to join us in Austin, Texas from Oct. 6-8. We’ll have much more conference news on the way. Stay safe everyone and here’s to a bright and optimistic 2021! Chris R. Swonger President & CEO Distilled Spirits Council of the United States and Responsibility.org

DISCUS’ New Craft Advisory Council Sets Its Sights on Engagement, DTC In January, DISCUS announced a new crop of 19 elected members to its Craft Advisory Council (CAC). Those members, in turn, voted to select Philip McDaniel, CEO and co-founder of St. Augustine Distillery in St. Augustine, Florida, to serve as chair; and Robert Cassell, president of New Liberty in Philadelphia, Pennsylvania, to serve as vice chair. All council members serve a two-year term. As the council chair, McDaniel will sit on the DISCUS board along with representatives from some of the largest companies in spirits. He says he’s looking forward to taking an active role. “When talking about a very small business like mine sitting on a board with Diageo and Bacardi, it’s common that you’d expect those people to be quiet. I want to educate people,” he said. “Our partners have invited us to have a seat at the table for a reason. It’s not for show. They want to hear what we need.” The CAC has existed in some form for more than a decade, but DISCUS President Chris Swonger said the council had grown “dormant” by the time he stepped into his current role in 2018. “For me, it was imperative that DISCUS be invested totally in supporting the craft distilling community across the board,” he said. “We are much stronger when we’re unified on advocacy issues.” Swonger acknowledges that DISCUS hasn’t always been a voice for small business. Director-level members of the trade organization read like a top-10 list of the biggest multinational brands in spirits, including Diageo, Bacardi, Pernod Ricard, Beam Suntory, Brown-Forman, and Moët Hennessy. DISCUS defines a “craft” member as any producer with less than $60 million in revenue. “I think for a while, DISCUS probably earned the reputation of just really representing the big guys,” said Swonger. “But we’ve worked really hard to try to garner some credibility and recognition that we’re invested in the success of the craft distiller community.” Swonger points to DISCUS’ extensive work on the Craft Beverage Modernization and Tax Reform Act as a recent example of successful collaboration between small and large producers. DISCUS invested heavily in supporting the proposed legislation, including developing a communications platform called Spirits United that made it easy to contact legislators. Craft distilleries, in turn, leveraged their community goodwill to generate an enormous number of letters to congresspeople in support of the law. “We were able to generate more than 40,000 letters to members of congress through the Spirits United platform,” he said. “That’s been to the benefit of everybody in the industry.” As small and large producers celebrate the FET reduction, the CAC and DISCUS are turning their attention to policy goals for the 2021-22 term. “Direct-to-consumer (DTC), for me personally and for the craft industry, is the number one issue at this point,” said McDaniel. “Particularly with COVID and all the challenges it has presented, it speaks now more than

ever to the opportunity and need to be able to put suppliers in direct contact with customers.” It’s not shaping up to be a simple issue. The COVID-19 pandemic has brought relaxed rules around shipping and online sales in many states, but wholesalers and retailers remain generally opposed to any substantial change in the existing three-tier system. Cassell acknowledges the challenge, but thinks compromise is possible by emphasizing how DTC has the potential to actually boost sales through the existing three-tier system by driving customers to try out new products. Customers might happily pay the shipping. “A customer might pay FedEx $20 to ship your bottle one time. But the next time, they want to go buy it in the store,” said Cassell. By emphasizing how DTC has the potential to actually grow the entire market, rather than simply siphon business from retailers, he sees a potential path to move forward. Plus, of course, you’ve got to start somewhere. “I can remember FET being brought up at a distillers conference in 2004, when there were 40 of us in a room,” said Cassell. “Seventeen years later, you actually have FET reform and parity for the first time since Prohibition. That, I think, is a great example of the small and large working together for a common goal towards something that sets people up for the future.” In support of that collaborative vision, Cassell said one of his priorities as vice chair is to continue to encourage small producer engagement on the DISCUS Craft Advisory Council. “Looking at this with a 10- or 20-year vision, the more participation we can get, the better,” said Cassell. “Regardless of what the issue might be, a goal is making sure everyone feels there’s a conduit the whole way through the organization and industry, making sure the craft guy in Indiana, North Dakota, California, is able to talk at the table and know their voice is being heard at the highest points of our industry.” —M. Waterbury 2021-22 DISTILLED SPIRITS COUNCIL OF THE UNITED STATES’ CRAFT ADVISORY COUNCIL CHAIR