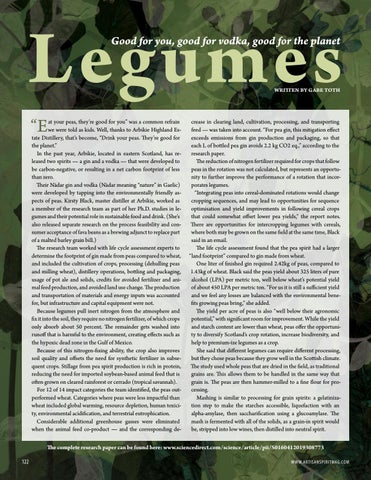 Legumes Good for you, good for vodka, good for the planet

at your peas, they’re good for you” was a common refrain we were told as kids. Well, thanks to Arbikie Highland Estate Distillery, that’s become, “Drink your peas. They’re good for the planet.” In the past year, Arbikie, located in eastern Scotland, has released two spirits — a gin and a vodka — that were developed to be carbon-negative, or resulting in a net carbon footprint of less than zero. Their Nàdar gin and vodka (Nàdar meaning “nature” in Gaelic) were developed by tapping into the environmentally friendly aspects of peas. Kirsty Black, master distiller at Arbikie, worked as a member of the research team as part of her Ph.D. studies in legumes and their potential role in sustainable food and drink. (She’s also released separate research on the process feasibility and consumer acceptance of fava beans as a brewing adjunct to replace part of a malted barley grain bill.) The research team worked with life cycle assessment experts to determine the footprint of gin made from peas compared to wheat, and included the cultivation of crops, processing (dehulling peas and milling wheat), distillery operations, bottling and packaging, usage of pot ale and solids, credits for avoided fertilizer and animal feed production, and avoided land use change. The production and transportation of materials and energy inputs was accounted for, but infrastructure and capital equipment were not. Because legumes pull inert nitrogen from the atmosphere and fix it into the soil, they require no nitrogen fertilizer, of which crops only absorb about 50 percent. The remainder gets washed into runoff that is harmful to the environment, creating effects such as the hypoxic dead zone in the Gulf of Mexico. Because of this nitrogen-fixing ability, the crop also improves soil quality and offsets the need for synthetic fertilizer in subsequent crops. Stillage from pea spirit production is rich in protein, reducing the need for imported soybean-based animal feed that is often grown on cleared rainforest or cerrado (tropical savannah). For 12 of 14 impact categories the team identified, the peas outperformed wheat. Categories where peas were less impactful than wheat included global warming, resource depletion, human toxicity, environmental acidification, and terrestrial eutrophication. Considerable additional greenhouse gasses were eliminated when the animal feed co-product — and the corresponding de-

crease in clearing land, cultivation, processing, and transporting feed — was taken into account. “For pea gin, this mitigation effect exceeds emissions from gin production and packaging, so that each L of bottled pea gin avoids 2.2 kg CO2 eq.,” according to the research paper. The reduction of nitrogen fertilizer required for crops that follow peas in the rotation was not calculated, but represents an opportunity to further improve the performance of a rotation that incorporates legumes. “Integrating peas into cereal-dominated rotations would change cropping sequences, and may lead to opportunities for sequence optimisation and yield improvements in following cereal crops that could somewhat offset lower pea yields,” the report notes. There are opportunities for intercropping legumes with cereals, where both may be grown on the same field at the same time, Black said in an email. The life cycle assessment found that the pea spirit had a larger “land footprint” compared to gin made from wheat. One liter of finished gin required 2.42kg of peas, compared to 1.43kg of wheat. Black said the peas yield about 325 liters of pure alcohol (LPA) per metric ton, well below wheat’s potential yield of about 450 LPA per metric ton. “For us it is still a sufficient yield and we feel any losses are balanced with the environmental benefits growing peas bring,” she added. The yield per acre of peas is also “well below their agronomic potential,” with significant room for improvement. While the yield and starch content are lower than wheat, peas offer the opportunity to diversify Scotland’s crop rotation, increase biodiversity, and help to premium-ize legumes as a crop. She said that different legumes can require different processing, but they chose peas because they grow well in the Scottish climate. The study used whole peas that are dried in the field, as traditional grains are. This allows them to be handled in the same way that grain is. The peas are then hammer-milled to a fine flour for processing. Mashing is similar to processing for grain spirits: a gelatinization step to make the starches accessible, liquefaction with an alpha-amylase, then saccharification using a glucoamylase. The mash is fermented with all of the solids, as a grain-in spirit would be, stripped into low wines, then distilled into neutral spirit.